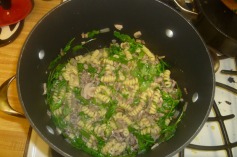 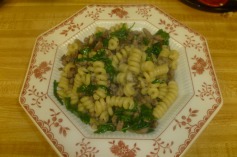 Sausage is quickly becoming one of the top three types of protein I’m frequenting of late. You’ve got chicken breasts, sirloin (usually for grinding) and then the sweet Italian sausage sold at my grocery store (I’ve got to look for a way to make this stuff at home). I really love how sausage works with pasta and have been trying lots of recipes that include both ingredients. When I was flipping through my Blue Binder of recipes torn out of magazines or printed out from the days of old, I came across one from Good Housekeeping called Sausage & Mushroom Penne. I decided to go with a different kind of pasta, but otherwise I followed it as written, going with arugala instead of kale for what it’s worth.

As has been the theme with many of the recipes I’ve written about lately, this one also happens to be pretty simple. You get the water going for the pasta and then get to work on the other stuff. First the sausage goes in, then the onion followed by the mushrooms. Once all that’s cooked and the pasta’s done, you combine the two, stir in the arugala, some pasta water and you’ve got yourself a nice dinner. You could mix up the greens or go with different kinds of sausage to suit this recipe to your specific tastes which is always fun.

By the way, sorry about some of the fuzzier pictures above. I’ve been having a few problems with the Kitchen Camera, but think I’ve got it figure out. Hopefully they’ll look better moving forwards.