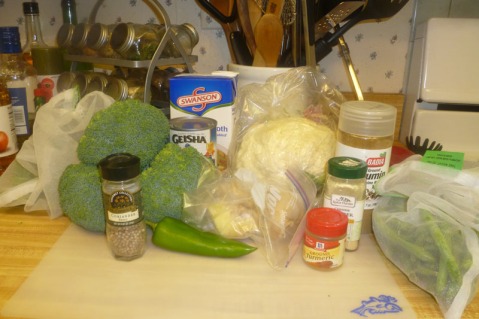 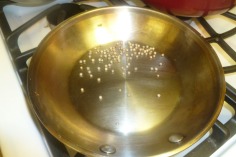 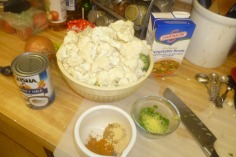 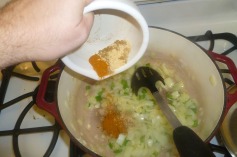 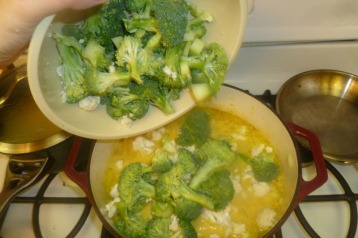 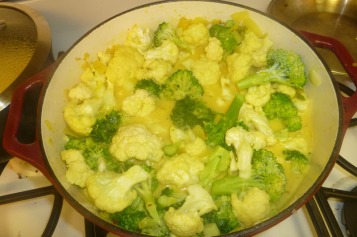 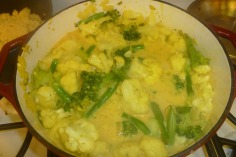 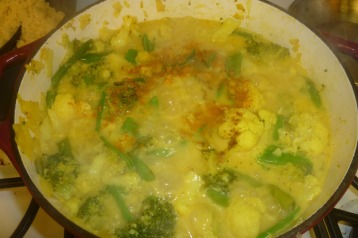 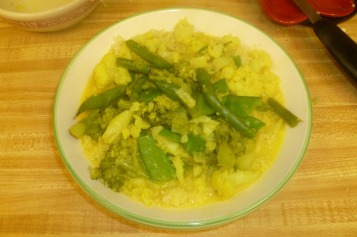 I think it’s good to drop in a vegetarian meal about once a week or so. I have noticed, though, that those dishes tend not to go as fast as some of the other leftovers. I’m not sure what it is, but those kinds of meals — or at least the ones I’ve made — tend to be pretty good on the first day but don’t look so appealing after that. That was the case with Nigella Lawson’s South Indian Vegetable Curry (also seen on page 154 of Nigella Kitchen).

The idea behind this dish, which I didn’t really realize until after I bought all the ingredients and then decided to read the intro, is to use up a bunch of vegetables that you might have in your fridge that are getting close to heading south. I guess it doesn’t really matter, but I bought everything new and tossed it into the pot which might have made for more of the dish than we needed.

Anyway, the meal came out well enough. I must admit, I’m not overly familiar with curry. My wife bought some light and dark curry powder when she was over in Sri Lanka, so I know we’ve got some of the good stuff, but I’m a little nervous when it comes to messing around with that particular spice both because I don’t know it very well and partly because I don’t want to waste it. Like I said, it was good the first time around, but that yellow and green bowl of mush didn’t look super appealing sitting in the fridge. I probably didn’t give it enough of a shot, but I don’t know if I’ll be returning to this one…unless I have a bunch of veggies I need to cook before they go bad.