Monkeying Around The Kitchen With Misfits Market 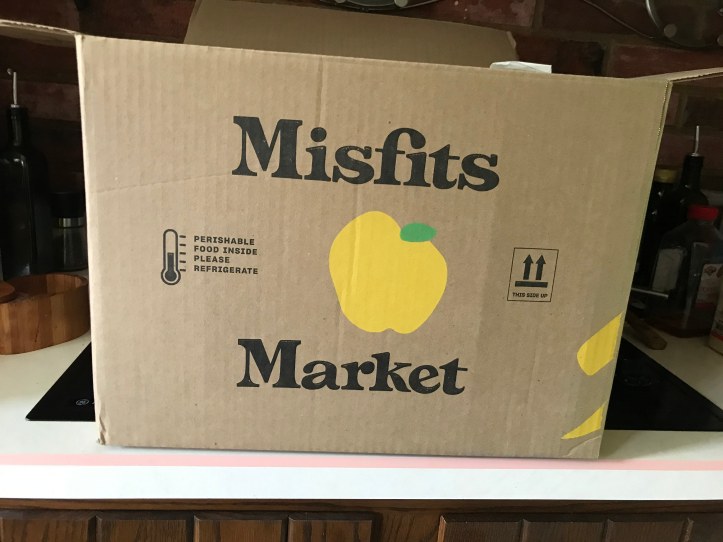 If you listen to just about any podcast in the world, you’ve probably heard ads for those meal prep kit subscriptions.  Personally, I prefer to create my own menus, but I’ve always been curious about the idea in general. So, when my wife told me about something somewhat similar, I was very interested. She’s the one who brought Misfits Market to my attention and I’m so glad she did because our weekly subscription box has opened my food-loving eyes!

Here’s the basic idea: a lot of produce doesn’t make it to stores because it looks kinda funky. Misfists takes those fruits and veggies that could be wasted, puts them in a box and mails them to your house. You can choose between two different types of subscriptions (after making sure they can ship to your area): Mischief and Madness. The former costs $22 per box and is said to include 10-13 pounds of produce while the latter weighs 18-22 pounds and runs $35 a box. After looking at our food budget and taking into account how much fresh fruit and veggies our kids consume, we went with the Madness.

So, “What’s in the box?” you ask in your best Brad Pitt from Seven voice. All kinds of great stuff that changes every week. Below you can see a pic of what we got just today. From left to right you have limes, cherry tomatoes, yellow onions, radishes, potatoes, turnips, one giant red beet, apples, cucumbers, mangoes, plum tomatoes, cauliflower, red cabbage and ginger. I believe they’re testing certain accounts to find out if customers would like to select what they get, but I like the unknown nature of this set-up. Sure, I sometimes buy a bunch of something that then shows up in the box and occasionally don’t use everything up before it goes bad, but that’s part of it!

Here are my initial thoughts looking at this week’s haul. The ginger goes right into the freezer. I, of course, just bought tomatoes and limes at the store, so I’m going to have to get creative with those. We tend to save our mangoes for weekly margaritas, which will also take care of some of the limes (hey, look at that). We’ll all snack on the apples, cukes and cherry tomatoes and I’ll probably turn that cabbage into a slaw for when I make burgers later in the week. The cauliflower will also make for a nice side, I’ll hold on to the root veggies until I get more, onions always get used and I’ll either pickle the radishes or pass them to my dad who likes them.

We’ve been members since about the beginning of the year and delivery has never been a problem. Sure, there have been a number of delays given the fact that we’re living in a pandemic and certain forces seem dead set on destroying the Postal Service, but that’s not Misfits’ fault! I can only think of a handful of occasions where we got something that had gone off and all of those coincided with shipping hiccups. Plus, they’re super flexible about when you get your boxes. Not only can you choose which day the boxes come, but you can also pause your shipments if need be without any penalty. If we know we were going to be gone for over a week (remember when we could leave our houses?!), we would just suspend for that week and it was no problem!

That being said, the best case scenario for us has been received the box on Friday or Saturday. That way, I can take everything I have into account before I make my menu and go to the store on Monday (usually). Sometimes, when I’m coming up with meal ideas, the potential for recipes to try seem overly daunting. One of the nice things about the Misfits box is that it can help focus my efforts. Even if I don’t have the contents before shopping, I tend to pick up a protein knowing that I’ll be able to come up with a nice veggie side when it does arrive.

It’s been great having a variety of produce options sent to the house, but it’s also been great for trying brand new things. We’ve gotten peppers that I could not identify and I’m not sure I’d ever even had turnips before they started appearing in my boxes (and now that I look on their site, I’m realizing they might have been jicama!). Not everything has been a home run — it turns out we are not radicchio fans — but we enjoy the possibilities Misfits brings into our house. I highly recommend checking them out if you have a craving for diverse produce and enough people to eat it all!