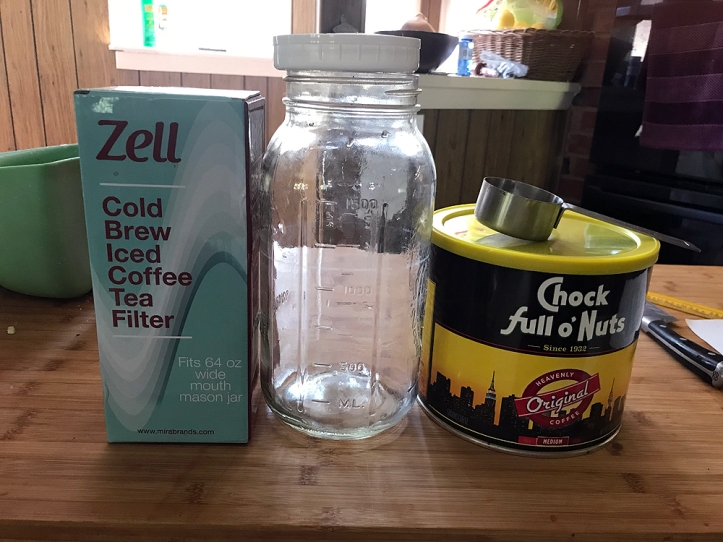 Long before Covid-19 hit, making trips to the coffee shop far less convenient or even enjoyable, I began making my own cold brew coffee. Over the past few summers I’ve experimented with a few different ways of doing this, but now have a solid, reliable method to share with you! It’s super simple, but did take a few new purchases, neither of which broke the bank.

So, the basic premise behind cold brew coffee is that you don’t actually warm the liquid exposed to the coffee grounds. Personally, I prefer this method to one of my previous attempts which just revolved around letting my French press cool down and put in the fridge. That definitely works, but — and this might sound odd — but I can still taste the heat applied to the beans and prefer the “cooler” taste when drinking a cold beverage. 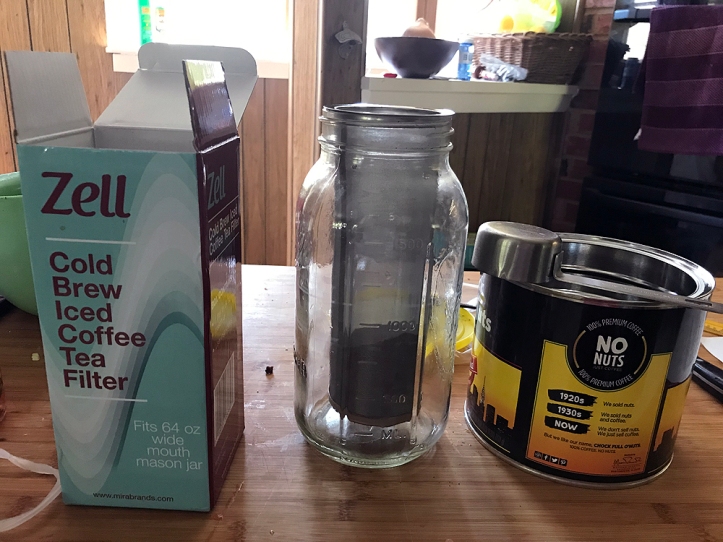 Okay, so here goes. After looking around a bit on Amazon, I came across the Zell Infuser. This is a metal mesh tube with an open top that hangs inside of a jar. You add the coffee, pour in water until its full and slap on a lid (I’m a big fan of the reusable plastic ones that come in either white or dark gray). Zell has two different options when it comes to size: 32 and 64 ounces.  Even though I didn’t have a 64 ounce jar, I knew that I would want more coffee, so I bought one of those on Amazon as well (I’m not sure if it was this exact one, but here’s one for about $20) so the whole set-up cost about $32 plus your preferred coffee, mine is Chock Full O’ Nuts. 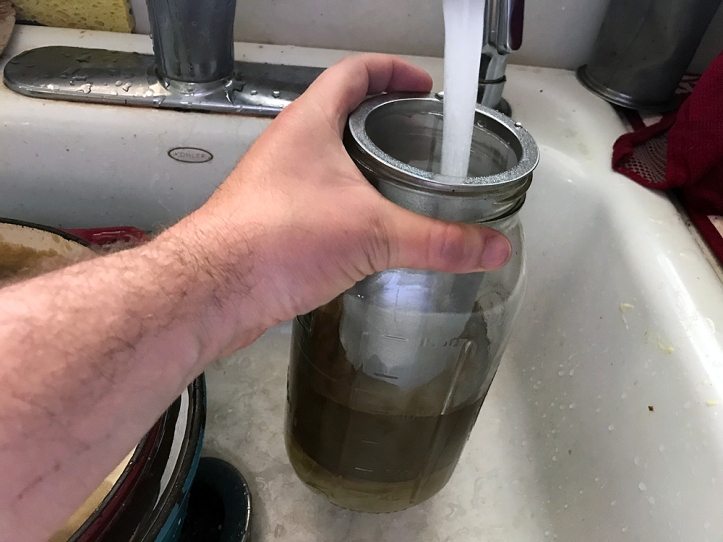 And that’s pretty much it. The first time I made cold brew with this rig, I put a full cup of coffee in the infuser, but that was way too intense for me. I bumped it back to 3/4 of a cup for a while and am now at 1/2 a cup which I let brew over night in the fridge. Actually, that’s another thing to take into account when figuring out which jar to use, the size of your fridge. A 64 oz jar is pretty big, about a foot, I’d guess. It fits in basically one corner of our icebox, but that’s it’s dedicated spot now! You also need to be careful with the infuser itself. I’ve banged it against the trash can too hard while emptying the grounds a few times which bent it. That bend eventually turned into a tear. As such, I’m on my second one, but am being a lot more careful this time around.

When it gets hot, I start the process up and drink cold brew coffee throughout the summer and occasionally beyond. I usually drink it with some coconut milk in a beer glass which holds about 12 ounces. I drink two of those in the morning which means I run through the process every other day. Occasionally, things get crazy around the house and I forget, but for the most part it’s a simple way to keep my caffeine addiction going in a way that doesn’t make me sweat my face off, which is pretty much what I deal with the rest of the day! You could, of course, also work with coffee ice cubes if you wanted as well as sweeteners or syrups, but the coconut milk covers those bases for me!