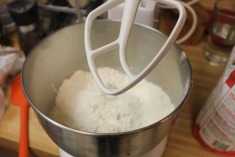 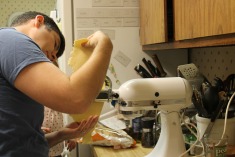 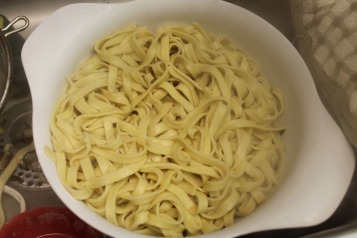 For Christmas, my folks got me some pretty awesome pasta-related cooking implements. In addition to the standard KitchenAid attachments (the roller and then the linguine and spaghetti cutters) as well as a ravioli maker. Since then I’ve made pasta four or five times to varying degrees of success. The pictures above — taken by my lovely and awesome wife — are from the very first attempt, though you will definitely see more homemade pasta on the blog than boxed.

The first time I created pasta, I used the simple white flour and egg-based recipe that came in the book with the attachments. It’s a pretty straightforward process that hopefully won’t take too much time to master. Basically, you make the dough using the mixer and then let the dough sit for a bit. After that, you cut the main ball into smaller pieces and then run it through the roller. I did each piece on the 2 setting, set it aside and then went through and did it on the 3 then 4 settings. Once that’s done, you get the cutter out and wind up with your pasta.

Sounds pretty simple, right? Kind of, but not always. The main problem I’ve had in my various attempts is getting the dough recipe down. Pasta dough is supposed to stick to itself, but that’s it. I’ve had dough that’s too dry that I added water to and super sticky dough that I added more flour too. I’m still getting the feel for things, but hope I’ll get to a place soon where I can see what it needs just from looking. I’ve also played with different dough recipes including the one found in Michael Ruhlman’s Ratio.

The dough consistency can be problematic when going through the rolling phase. If it’s too sticky, it gets caught up and won’t go through. If it’s too think, it also won’t go through smoothly and if it’s too dry you’re in the same place. I’ve found that using a ton of flour on my workspace can help with the sticky problem. I also recommend breaking the large ball up into much smaller pieces that you can flatten out either by hand or using a rolling pin.

Since I work in a small, galley kitchen, I found myself struggling to figure out the best way to set up. In these pictures, you can see my kid hanging out on her step stool watching me. Since then, I’ve started putting a TV tray there with either a cutting board or wax paper covering it. I douse that in flour to help keep everything from sticking together.

Once the pasta is actually cut, I toss it in a pile on whichever floured surface I have at my disposable that’s not already filled. At this point, you want to have your water boiling so you can toss it in. The rule I go by is that, if it floats, it’s done. This was something that took some getting used to for me because I wasn’t sure what fresh pasta was supposed to taste like and therefore wasn’t sure when it was done. But, after tasting the floating noodles, I got the idea, drained and then mixed in with my sauce.

I also want to say that I tried my hand at making semolina pasta just once and it didn’t go so well. I made the dough as the recipe said but found that my dough was way too thick to go through the roller. Fearing I was running out of time to have dinner ready by the time my wife got home from work, I decided to just flatten it out with a rolling pin and cut with a knife and a dough scraper thingie. As you can probably imagine, the noodles were pretty thick, but I think they still turned out pretty well. While things didn’t go as planned, I’m kind of glad this happened because it showed me that I can also do this without a machine if need be. Still, the roller and cutters work WAY faster than going by hand.

As I’ve said when it comes to grinding my own meat (I haven’t bought ground meat in over a year) or making my own sauce (which I regret not being able to do last fall), I know these extra steps take more time and can add a lot more headaches to the meal-making process, but I personally love knowing that I’ve really built the meal from the ground up as much as makes sense.