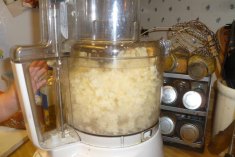 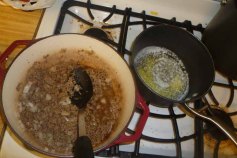 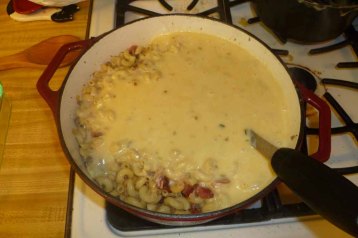 Our two year old daughter loves macaroni and cheese. I mean, who doesn’t, right? But she’s all over it. In fact, the dish holds such a special place in her tiny little head that pretty much everything with noodles is “macos and cheese” to her. As such, I’ve been looking around for various ways of cooking mac and cheese and seem to not be doing a great job of it. The general problem I keep running into is that cheddar’s just not doing it for me on the creamy scale. I’ve got to come up with something else to throw in there that really brings that out, but until then, I’m keeping track of the recipes I like in hopes that I can return to them later on and really knock them out with a few different cheeses.

Rachael Ray’s Bacon Burger Mac N Cheese is one such recipe. The only deviations I made from the recipe included replacing a bit of the milk with water (which is another factor in the creaminess factor) and I also ground up my own beef. Aside from that it was business as usual.

While I wished it was cheesier, the resulting dish was still super tasty. I enjoyed the bacon in there — adding one of the best foods to one of the best dishes just makes sense when you ponder it — and think the fresh ground beef added a fresher note, but I was also surprised with how much I enjoyed the faint hints at ketchup and mustard in the dish.

It might sound strange, but I’d really like to try this dish with more homemade and locally sourced ingredients. Beef and bacon from a local farm, some homemade ketchup and pasta and even some local cheese. I think you could have something really special and hearty hear with a few alterations.