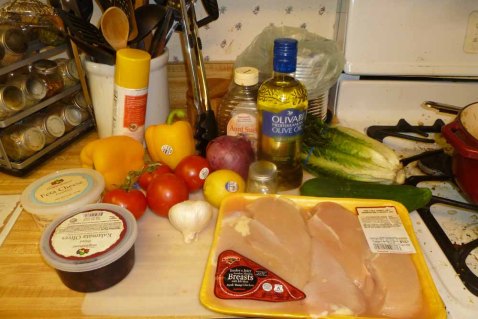 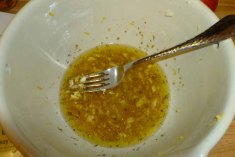 I recently started one food related project that spawned another. We’ve got stacks of magazine laying around that are chock full of useful recipes. I decided to clear some space and also add to my Big Blue Binder, so I started cutting out pages. That lead me to restructuring said binder because it was just a big hodge podge with no order. I’ve since re-organized and even gotten dividers. I feel so efficient!

Anyway, one of the recipes I came across during this process was Good Housekeeping’s Chicken Gyro Salad which fit in well with my criteria for meals these days: try not to make too much heat. This one only required the cooking of the chicken and some peppers which wasn’t too bad and a good deal of chopping.

Aside from the pita chips, I followed the recipe pretty strictly. Instead of using an outdoor grill, though, I went with an iron skillet on our stove. I got the dressing together first and marinated the chicken for the prescribed 15 minutes. While chicken absorbed that goodness, I got the peppers and other vegetables cut up. The peppers met the heat first followed by the chicken. The rest was pretty simple.

I enjoyed this recipe because there was a lot of flavors I already enjoy going in. Since it’s not lamb, it’s not a real gyro, but it’s a pretty good alternative that captures many of the flavors.

I do want to mention one idea I had while chopping olives, though. We have this egg slicer thing that you can see in the pictures. I rarely use it because I don’t really like hard boiled eggs. But, while chopping tiny olives, I realized we had this thing in our drawer of miscellany and made good use of it! So, if you’ve got a spare egg chopper and need to cut whole olives into sliced ones, think outside the box!