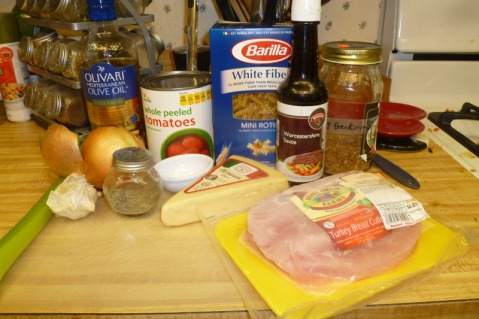 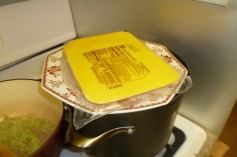 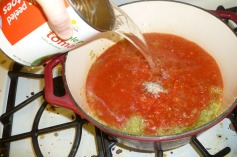 Sometimes you’re just so excited to jump into a new cookbook that you don’t fully read the recipe correctly. That’s what happened with me and Nigella Lawson’s Nigella Kitchen. I came across her recipe for Turkey Meatballs In Tomato Sauce (page 44) and was immediately interested. When I noticed a note towards the end that suggested making her Arugala & Lemon Couscous (page 90) I started making that as well without fully reading that paragraph or really thinking much about what I was doing. What Lawson suggests in that graph is serving the prepared meatballs and sauce over the couscous, not in addition to. The way I did it, we wound up having a lot of pasta in one meal, but that’s okay every now and then.

One of the most interesting aspects of this sauce recipe was a method Lawson uses where you blend celery and onion into a paste and use that in the sauce instead of the usual diced or chopped variety. This seems like a good way to do this that saves on a little prep time and makes for a less chunky sauce (if that’s what you’re going for). I think I’m going to try this the next time I make Smitten Kitchen’s Tomato Sauce With Onion and Butter, which just so happens to be on the menu tonight!

From there you’ve got pretty standard sauce and meatball-making techniques (this is the first time I used my Kitchenaid meat grinder attachment for turkey, but it worked great). Another aspect of this recipe that I like is that you don’t bake the meatballs or cook them on the stove, you just put them all in the sauce while it simmers on the stove top. One thing that did surprise me about the recipe and I think made for a weaker sauce than I usually like is that it calls for a can of water. That seems like a missed opportunity for something that could add more flavor. I think next time I make this recipes I’ll use tomato sauce or V8 juice or something along those lines to bolster the sauce a bit.

The couscous is super easy to make. You get some chicken broth boiling and while cooking the couscous in another pot in some olive oil. Once the broth is boiling you pour it over the couscous, cover and let sit for ten minutes off the heat. Once that’s done you throw it in a bowl with some arugala along with lemon zest, lemon juice and some salt and pepper. This makes for a nice, clean, zingy side dish.

My wife and I both agreed that the meal would have been close to perfect had I forgotten about the pasta (it was too late in the process when I realized how much starch I was preparing) and just served the sauce and meatballs over the couscous. Since everything was on the same plate, they wound up mixing and the citrus-y zest of the couscous played very well off of the tomato sauce and turkey.