Cutting Board Next To Sink 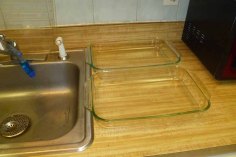 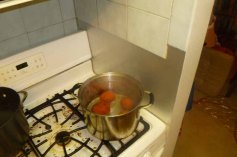 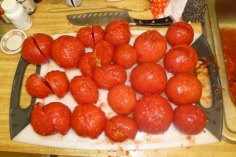 A couple weeks back, while on the way home from a weekend trip to New Paltz, we stopped by a great farm stand and I walked away with a box full of tomatoes for $10 with a mind set towards making some homemade red sauce based on the recipes in Francesco Ghedini’s Northern Italian Cooking. The first step for all that is making what’s called Polpa Al Pomodoro (page 4), so I got to work on that. Even though I made a much smaller version of this and wrote about it here on the site, I figured it was worth a post writing about doing so on a much larger scale.

I tried to set myself up well which meant putting the box of tomatoes next to the stove where a pot of water was boiling. Across from that I had a cutting board where I would get the skin off, halve them and then squeeze the insides out into the sink. I then put the squeezed tomato halves into two large glass containers. Once I got all that done, I moved the halved tomatoes back over to the cutting board and chopped them up before putting some of the chopped tomatoes into a strainer before storing them in those same glass containers.

With so many tomatoes this took a couple hours. At the suggestion of my wife, I scored the bottom of the tomatoes (cutting an X in the skin) which made getting the skin off so much easier. I’d put as many tomatoes in the boiling water as I could fit — only for about 10-15 seconds — but I still got backed up and had to go from that to peeling and halving and then back again. I’m sure there’s a better way to do all this, but I wasn’t sure if it’d still be easy to get the skin off if the tomatoes cooled down too much.

Anyway, this system worked for me in our limited space and I got a pretty good yield. I was able to make two different sauces (posts coming soon) and even freeze some of the basic pulp for later, so I’d say that was a success!