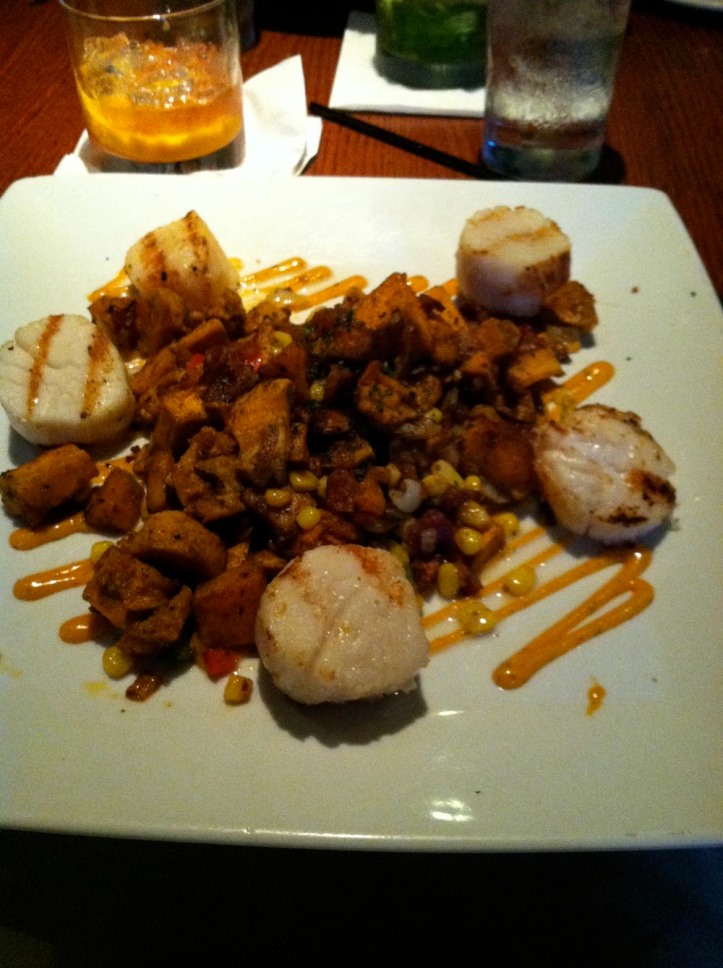 To celebrate our sixth wedding anniversary (which was actually yesterday, but we went out on Saturday), my lovely wife did a bunch of research about nice restaurants around her parents’ house in New Hampshire. We decided on a place called Cotton in Manchester which was a wonderful restaurant and got big huge thumbs up from both of us. We decided to skip appetizers, but did go with some drinks. I had a couple Cherry Old Fashioneds which had Red Stag by Jim Beam Black Cherry Bourbon with muddled, sugar, orange slice, cherry and a dash of bitters. Man, that was a tasty drink that I would love to have again and again.

For dinner, I went with Wood Grilled Native All-Natural Jumbo Sea Scallops. I’m a big fan of scallops and usually only get them when we go somewhere in the summer near the ocean in New England and those are always fried. Don’t get me wrong, I dig fried scallops, but it’s such an awesome food that sometimes you just want to eat the thing and not the breading. Cotton’s jump scallops were super tasty and wonderful. When I saw there were only five on the plate, I was a little bummed, but then I started cutting them up and realized this was the perfect amount of food, especially when included with the applewood smoked bacon, sweet potato corn hash and honey chipotle aioli. Man, that hash was fantastic. The sweetness of the sweet potatoes bounced perfectly off the saltiness of the bacon, the slight heat of the aioli and the crispness of the corn.

I can not recommend this place enough. We dropped a good amount of money because it was our anniversary. Had this just been a regular date, though, there were plenty of other options that still looked awesome and probably tasted the same. I would love to eat at Cotton again. And again. And again. By the way, sorry about the bad picture, I felt weird snapping even this one and just did it on the quick.