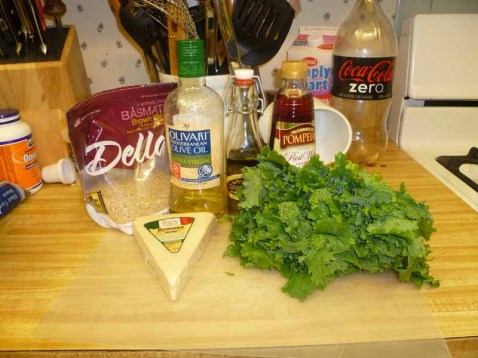 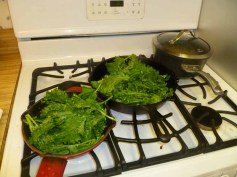 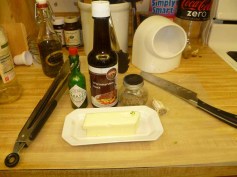 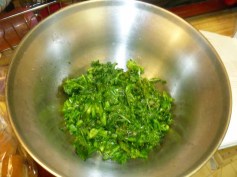 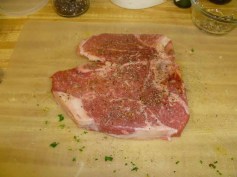 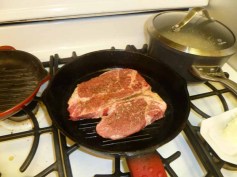 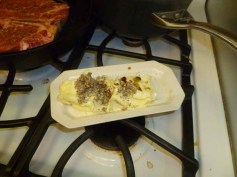 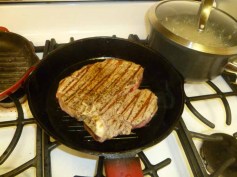 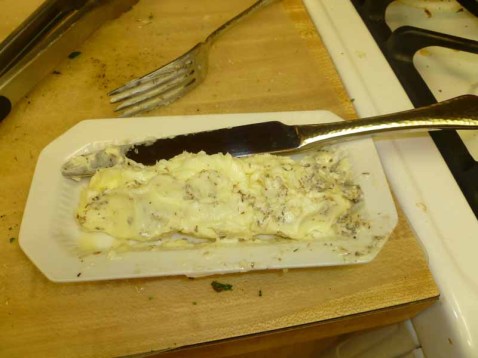 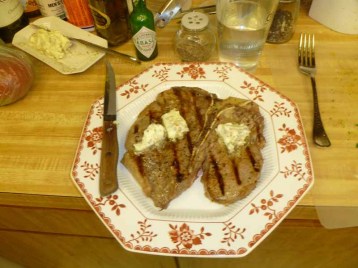 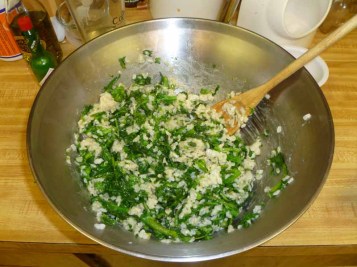 I’ve found the two most satisfying meals are the simple ones done really well and the complex ones also done really well. When I made my first batch of pierogies, they took forever but tasted really amazing (didn’t have nearly the same amount of luck the second time around). I experienced the former last week when I tried a pair of recipes in a cookbook we got when we got married called The William-Sonoma Bride & Groom Cookbook. I set out to make Grilled T-Bones With Garlic Butter (page 97) and Tuscan Farro (page 190), but wound up making a porterhouse because that’s what I could find at my grocery store and Tuscan Rice because I have no idea what farro is and looking it up on Wikipedia did not help find it at my local grocery store. It didn’t matter much, this turned out to be a wonderful meal.

The only thing I didn’t prep in enough time was the garlic butter, which I didn’t have down to room temperature when I started. I made up for this by putting the butter on a plate on the stove while I made the other ingredients and had a pretty good amount of luck with that. To the mushy butter, I added four chopped cloves of garlic, some thyme and then a few dashes of Worcestershire and green Tobasco sauce. The recipe says to roll it up in a piece of plastic wrap, but I had zero luck with that and just kind of morphed it as best I could. Didn’t matter, it was still nice and herby.

For the Tuscan Rice, I started off by getting the rice going and then cleaning the broccoli rabe, tossing it with some salt and olive oil and then grilling them on a pair of cast iron grill pans. I’m sure grilling on an actual grill would have gotten better results, but I still thought it went pretty well. Once those were done, I moved the rabe to a bowl and let it cool before chopping. To that I added some more olive oil and red wine vinegar and the rice once it was done cooking.

Between taking the rabe off the grill and the rice being done, I grilled the porterhouse. I actually bought two pretty good sized steaks, but after pulling out the larger one and applying some olive oil, salt, pepper and thyme, I realized that it would probably be enough for my wife and I. I froze the other one for a later date. Anyway, I warmed the larger cast iron to near screaming and then put the steak on. I cooked it for four minutes on one side and five on the other. I tested it with my fingers to make sure it came in at medium.

Boom, it worked out great. The steaks were cooked perfectly, the garlic butter was nice and garlic buttery and the Tuscan Rice was interesting. I’d never had broccoli rabe before and was surprised with the sharp horseradish-like flavor it had. I even warmed it up the next day for another side and it worked well that way too.