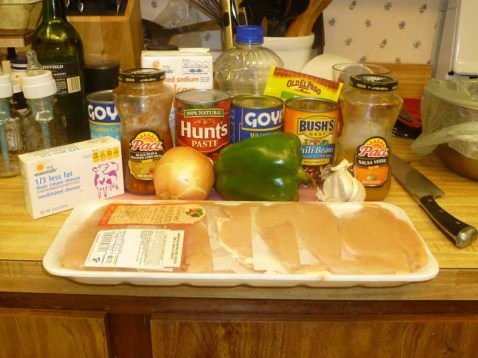 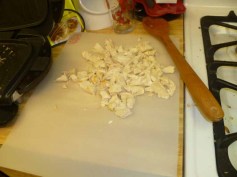 For some reason while I was making this Food Network recipe for Tex Mex Chicken Taco Soup, I was under the impression that I was making chili. I should have known that it wasn’t when the recipe said it only takes 45 minutes to make…and by actually reading the title.

Anyway, I followed the recipe as it’s written with a few changes. I used low fat cream cheese to cut down on some of the calories. I also grilled the chicken on the George Foreman instead of boiling it. For what it’s worth, I used Old El Paso Mild Taco Seasoning and half a jar each of Pace Salsa Verde and Pace Black Bean & Roasted Corn Salsa that I had left over from various recipes and snack-fests.

I almost didn’t add the cream cheese mixture into the soup because I didn’t want it to get to thick or possibly screw up the good thing I had going, so I asked my wife. She said to pour it in and see how it came out. Good thing I listened to her because we wound up with a nice creamy, spicy soup with nice corn and hominy accents. You can really have fun with this recipe by playing around with different beans, meats and salsa.