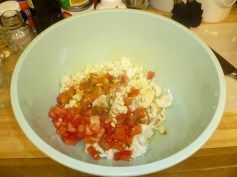 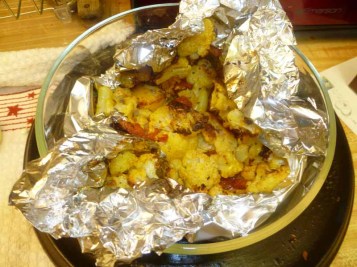 As I said when talking about making Marinated Cucumbers I’m always on the lookout for new ways to cook veggies and still keep them healthy. So, I got pretty excited when I stumbled across this recipe for Cauliflower With Tomatoes on Food Network.com. Cauliflower’s one of the vegetables that I don’t have much of a history with. It’s been at just about every party I’ve been at with a veggie platter, but aside from that, it hasn’t had much of a role in my culinary life, but that doens’t mean I have anything against it.

As you can see by following the link, this is a very easy recipe. Combine a head of chopped cauliflower in a bowl with three chopped plum tomatoes, olive oil, two minced cloves of garlic, cumin seeds, turmeric, salt and pepper (I skipped the cayenne), mix thoroughly and pop in the oven at 450 degrees for 25 minutes.

There were a few days between when I bought ingredients and actually got around to making this side, so two of my tomatoes went bad, which was a bummer, but I don’t think it effected the flavor too much. The real punch comes from the turmeric and cumin coming together. Cauliflower’s kind of bland, so it works well as a vehicle for flavors. By cooking it in the oven, some of those flavors really get sealed in. I’m becoming a big fan of turmeric, a spice I don’t remember having until the last few years.

I will definitely be adding this recipe to my veggie side rotation moving forward. Simple and tasty? You can’t go wrong with that.