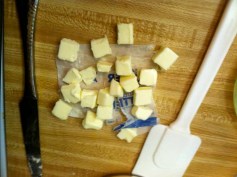 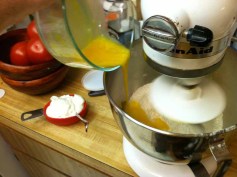 Dough Ball About To Be Wrapped

Toledo has a pretty big Polish population, yet I didn’t even hear about pierogies until high school when we switched churches to St. Hyacinth’s which was a predominately Polish church. To raise money, they would sell the delightful potato-filled dumplings and we bout a few different kinds. They were very tasty, though I don’t think I had them until the last year or two. I can’t remember which came first, but some time last year, I both made pierogies from this recipe I found by Googling around and also had them at a place in New Paltz called The Moonlight Cafe (53 Main St., Cornwall, NY). They were tasty both times, so much so that a week or two back, I thought it’d be nice to have them again!

This time around, I ran into a few problems like losing interest the Sunday I intended to make them and cutting my thumb on the Monday I actually did make them (it was alright and I finished making them). Anyway, a few Saturdays back I decided to make the dough which was really simple, which is saying something because I never make dough. I busted out the wife’s Kitchenaide mixer and got all that going with no problem, then wrapped the ball in plastic and popped it in the fridge over night. 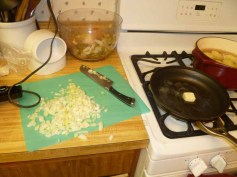 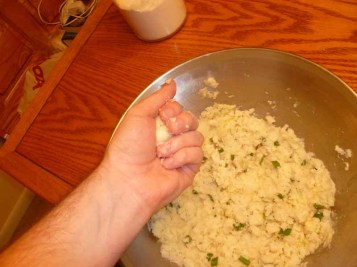 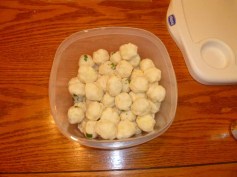 All The Potato Balls 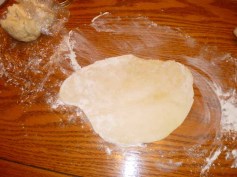 Rolling Out The Dough

A Plate Of Pierogies 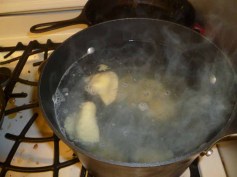 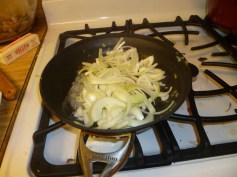 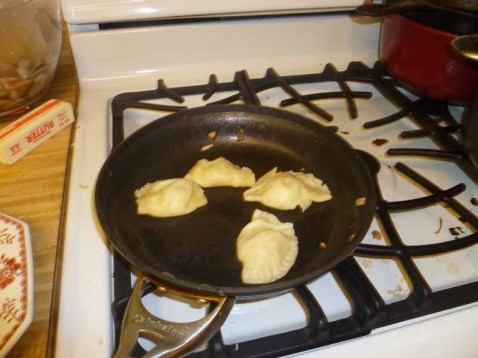 Boiled Pierogies In The Pan 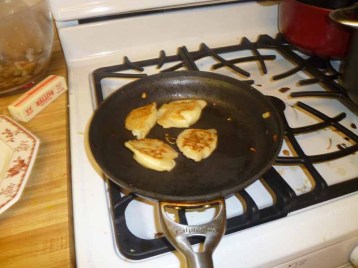 Like I said, I was going to continue the next day, but was beat, so I put it off. The second part is a lot more work intensive because you have to make mashed potatoes, roll the dough, cut out circles, stuff them with the potato filling, boil each pierogie and then cook them in a pan. Since, it’s a long process and I had a slow Monday on my hands, I got to work. Peeling the potatoes was first on the list, which was no problem. I put those in the Dutch oven, covered with water and started boiling. My intention was to do sour cream, cheddar cheese and bacon in the mashed potatoes, so I got to work shredding the cheese. While reaching for a scale to see how much cheese I had, I wound up cutting the tip of my thumb and nail. For more on that, come back for an upcoming post, or read this account I wrote over on Pop Poppa, my dad blog.

After getting myself patched up, I finished mashing the potatoes with cheese and chives, but skipped the bacon. At that point I took a break, not sure if I had it in me to finish up. But, I rallied later on and got back to work. First, I rolled the potato mix into balls for stuffing. Then I rolled out the dough and used a clean jar top for cutting circles. I think I used a bar glass last time, but this was a little bigger. I had the same problem I did before, though, about not getting the dough big enough to fit the large-ish potato balls. After cutting out the smaller circles, I would roll those again and then insert the filling and clamped the dough down with a fork. Since my hand was feeling funky and I was doing a lot of this with my right hand raised up, I didn’t make all the pierogies I could, but instead made enough for dinner that night.

The next step is boiling. You toss the dumplings in boiling water and wait for them to rise to the top, rinse in cold water and repeat. At this point, you also cooking a chopped onion in a buttered pan that you will then cook the pierogies. I wasn’t sure from the recipe if you’re supposed to keep the onions in when you cook the dumplings, but since there were so many onions, I took them out and put them on their own plate for serving. Then it was a matter of browning the pierogies on both sides and serving with the onions and sour cream.

I’m honestly not sure if these guys were as good as last time. The dough felt a little dry and tough. Plus, the very first time I cooked them, I just decided one weekend to do it. I went out, got the stuff, started the long process and came out with tasty food on the other end. This time I had to fight the blahs and muscle through another dumb injury. I was glad that I used hand shredded cheese this time instead of store-bought stuff, but then again, that lead directly to my cut, so maybe it wasn’t such a great thing? I’ll give ’em another shot soon and will have a post up shortly about what I did with all those extra potato balls.