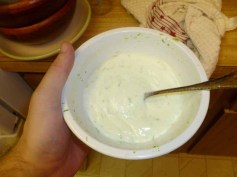 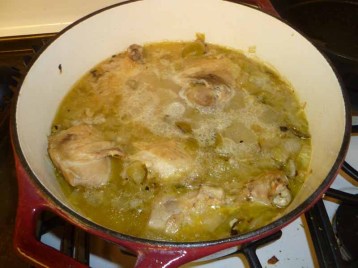 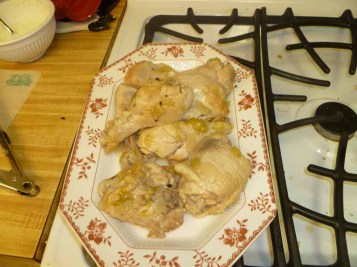 I don’t watch a lot of actual cooking shows on Food Network, but I do like checking out Anne Burrell’s show when I stumble upon it. I like her because I know she’s legit, not only being a bad ass chef in her own right, but also because she was Mario Batali’s sous chef on Iron Chef America. I’ve cooked a few things I’ve either seen on FoodNetwork.com or on her show Secrets Of A Restaurant Chef. I stumbled upon her recipe for Braised Chicken with Tomatillos and Jalapenos the other day before heading to the grocery store for the first time after being sick. I liked the recipe because it was kind of involved and really wanted to jump in. I’m also a fan of the lime and tomatillo flavors involved.

I still haven’t made my own stock yet (this week hopefully!), so I went with store bought. That was really the only change I made to the recipe. Actually, now that I think about it, I couldn’t find a Spanish onion either, so I went with a yellow one. There might have been a lot of chopping and several different steps, but overall the recipe was really easy to follow. I also liked that you could do one part of the recipe and then move over and do something else, like putting the super simple and really tasty lime sour cream together.

This is usually the part of the post when I would talk about how the food tasted, but I didn’t actually eat any of it. I hadn’t eaten lunch that day, was feeling light headed and picked up a Whopper from Burger King on my way home. Those guys are bigger than I expected, so I was full by the time I finished cooking. My wife tried it and wasn’t a huge fan because of the chicken being on the bone and the fact that the sauce was really watery (probably should have boiled it down more). With so much extra liquid and chicken, I figured I’d turn the whole thing into a soup, but that’s a post for another day!