DC Super Hero Girls is here and I’m already a big fan! The cross-platform initiative plans to take many of DC Entertainment’s popular female characters, re-envision them for a younger crowd and make them easily accessible to kids, specifically young girls. The general idea was announced in the past few months, but USA Today scored the first look at the roll out this afternoon.

DCSHG will come to life in a variety of arenas. There’s a cartoon presented in webisode chunks (the first one is here) from WB Animation plus a line of toys from Mattel, comics from DC, books from Random House and a variety of other offerings that will presumably make themselves known through the official website.

As you can see in the aforementioned animation, the general conceit here is that all of these young heroes attend the same high school where they’re trained how to use their abilities for good. It sounds like a mix of Ultimate Spider-Man and Monster High or the My Little Pony: Equestria Girls movies. 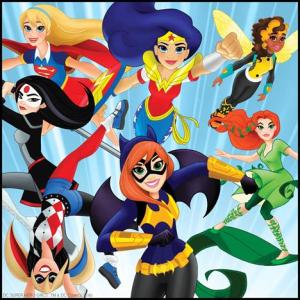 From checking out the character page of the official site, it looks like Wonder Woman, Supergirl, Harley Quinn, Poison Ivy, Batgirl, Katana and Bumblebee will take center stage, but others like Catwoman, Cheetah, Hawkgirl, Star Sapphire, Beast Boy and Hal Jordan will also appear. Follow the link at the beginning of this paragraph to go through each of them, read through their bios and even click around to see their specific powers and abilities.

The characters will also make their way to toy aisles thanks to Mattel’s action dolls. USA Today got the first look at these. Above you can see the foot-tall versions of Wonder Woman and Supergirl alongside the 6-inch takes on Harley and Bumblebee!

As a lifelong fan of comic books — specifically the ones published by DC — I’m very excited about the track that DC and WB are taking with this concept. Ultimately, I wish we didn’t have to make such a big effort to create entertainment that doesn’t alienate girls from the world of super heroes, but this seems like a really solid move. My daughter already has a good deal of comic-related toys in her ever-growing collection, but the fact that more will be aimed specifically at her is aces in my book!