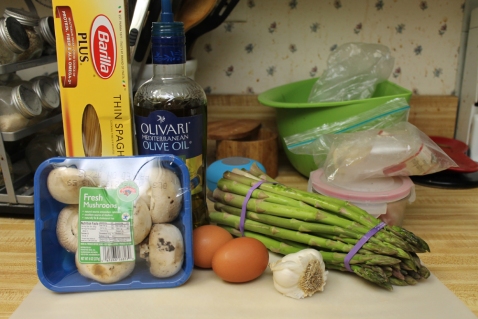 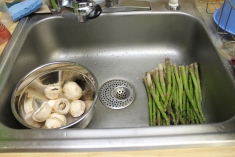 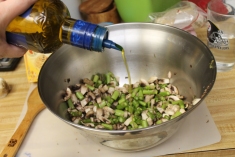 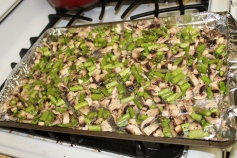 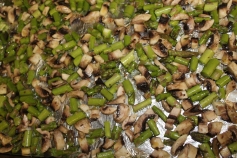 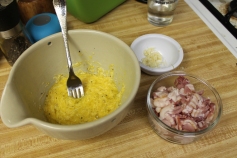 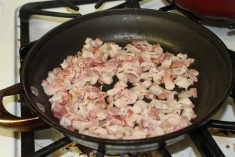 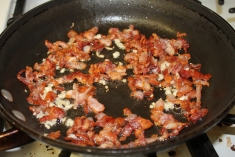 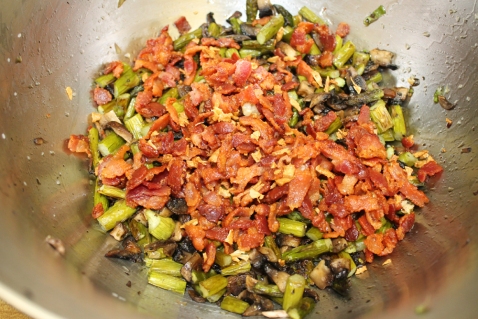 You know a recipe must be good if I not only make it twice in the span of 30 days, but also prepare it for a parent visit. That was the case with Closet Cooking’s Roasted Asparagus & Mushroom Carbonara. I saw this recipe while trying to figure out my menu a few weeks back and it jumped right off the page. I love bacon. I love carbonara. I loved mushrooms and I’m pretty alright with asparagus. It also doesn’t use a full package of bacon, which is kind of nice, especially when you’re looking to make that particular protein work for a few different meals.

The prep for this dish is also super simple. You wash, then cut the mushrooms and asparagus, mix them with some olive oil, salt and pepper before putting them in a 400 degree oven for 20-25 minutes. Since I chopped my veggies into smaller bits than suggested, I kept them in the oven for a bit less time than recommended. With that doing it’s thing, I got my pasta going and cut up the garlic followed by the bacon. While the pork sizzled, I shredded the cheese and combined it with the two beaten eggs plus salt and pepper. Once the bacon is done, you toss in the garlic (I did this instead of removing the bacon as suggested in the main recipe), cook for 30 seconds and then mix with the cooked pasta, roasted veggies and cheese-egg mix.

When I made this the first time, I used boxed pasta, but last night I went full-out and made my own. The only other change I made was throwing in some chopped shallot I had lying around. Either way, you’ve got this great mix of fresh vegetables, smoky bacon and that salty carbonara goodness that solidifies as you mix. Making this meal even better is that fact that it tastes just as good reheated as it did the first day.