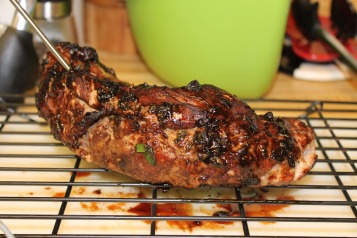 My wife and I are hoping to get into a house in the relatively near future, so to get prepared for that added expense in our lives, we’re implementing a budget. This has altered how I tackle meals and groceries to an extent. I used to go to my sources first (cookbooks, websites, blogs, The Big Blue Binder, etc.), write out my list and go shopping. Now, I check the grocery store circular first to see what’s on sale, specifically in the meat section, and then create the menu around that.

That’s what lead me to pick up pork loin last week. From there I went through my recently organized Big Blue Binder and came across a recipe for Ginger-Sesame Marinade from Real Simple that would work well with that particular cut of meat. About four or five hours before dinner, I got the meat in a sealable bag and then mixed together 1/4 cup low-sodium soy sauce, 1 tablespoon grated ginger, 1 tablespoon sesame oil, 2 scallions cut with kitchen scissors and 1/4 teaspoon crushed red pepper. Combine those things, put the bag in the refrigerator and make sure to shift it about every now and then.

Since the actual Real Simple recipe just featured the marinade instructions, I went to my trust Betty Crocker Cookbook and looked around for some guidance. On page 255 I found the recipe for Italian Roasted Pork Tenderloin. I didn’t completely follow this, but it was certainly helpful. I got the oven going to 450 degrees and then got a cast iron pan super hot before putting the pork loin and some of the marinade in there. I seared the meat in the pan and then put it in the oven with my new electric thermometer aiming for 155 degrees. At that point I took it out and let sit on a rack — a trick I learned from watching David Chang and Anthony Bourdain’s excellent The Mind Of A Chef — which allows the air to hit all sides of the meat. After about 10 minutes, I sliced it up and served with some sugar snap peas my wife picked when she went strawberry picking with my daughter.

Unfortunately, we had some more refrigerator trouble after I made this so the majority of the leftovers had to get tossed, but before that we were treated to a salty, tangy bit of pork that was just delightful. My wife made herself a cuban with the meat for lunch the next day which gave me an idea to do a more Asian themed version of the cuban with kimchi, which I’ve never actually tried, so who knows if it would work? Maybe I’ll give that a shot next time I make this ridiculously simple, very tasty meal.