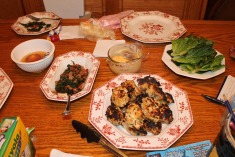 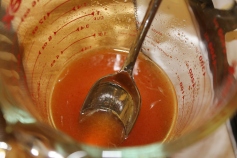 While my attempts to make Giada de Laurentiis’ Thai Curry might not have netted the best results, I will say that I had much more success her recipe for Naked Spring Rolls which were both part of the same Thai-themed episode of her Food Network show. It also happened to be a super simple and delicious recipe to put together.

The sauce in the recipe was really easy to put together and doesn’t need much in the way of commentary. I will say that it was tangy and delicious thanks to the combination of lime juice and fish sauce. To augment the dish, though, I also decided to make some sriracha mayonnaise. For this I just squeezed about two teaspoons of the hot sauce into the remaining homemade mayo I had in the fridge after making Banging’ BLTs and Lemony Tarragon Chicken Salad which was about a 1/4 of a cup. The only change I made in the recipe was swapping out agave (which I didn’t have on hand) for honey.

With the condiments created, I got to work on the actual spring rolls. As with every other kind of meat, I started out with whole, partially frozen pieces, cut them up and ran them through the meat grinder. Since I was already getting the grinder out, I figured I’d try running the carrot and shallot through there too. It worked pretty well, but there was an intense, tear-jerking blast as the shallot went through. All that went into one big bowl with the other ingredients which got wrapped in plastic and sat for the required 20 minutes.

After that point, I looked at the mixture and realized it was not going to stay together in the oven. So, I grabbed the two ends from our latest loaf of wheat bread, rubbed chunks between my hands to create tiny crumbs and mixed it all together with my hands. I got 15 of the spring rolls out of this and put the foil-wrapped pan under the broiler.

I served these with lettuce leaves, though they’re not super necessary. I dug how this meal came together, but my wife loved it, saying it was one of her top five favorite things I’ve cooked. I’m not sure if I’d go that far, but I am a big fan of this dish. It worked really well for us as it was, but could also make for a great party food (if made smaller) or a delicious sandwich. In fact, my only complaint was that the thinner sauce didn’t stick to anything which bummed me out because it was so delicious. If this was a sandwich, though, you could pour that sauce right into the bread to infuse that flavor! Dang, that idea’s so good it makes me want to start a food truck (not that it would take that much cajoling to do that anyway).