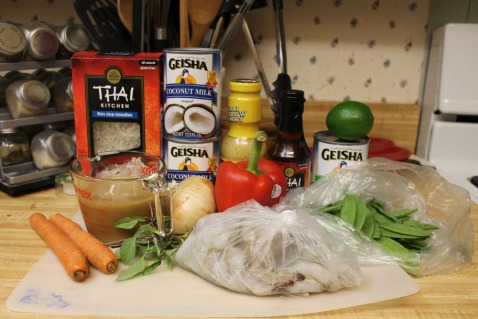 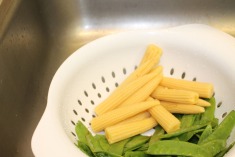 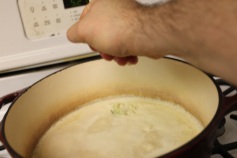 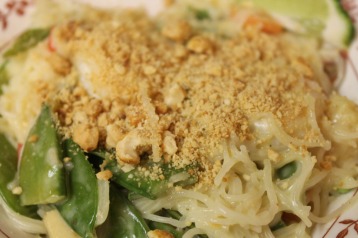 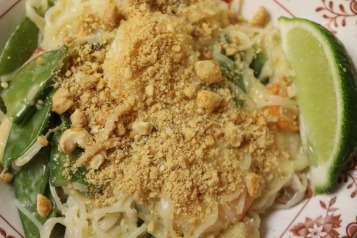 Food Network has really changed over the years. It used to be packed with people making interesting foods and teaching us how. Now, even though they act like that’s still the main focus on shows like Next Food Network Star (which should probably be retitled The Next Food Network Game Show Host), you’ve got to search around more to see cooks telling you how to cook interesting and amazing food. While flipping around a few weekends back, we happened to stumble upon one of those wonderful times. That’s where I got the recipe for Giada De Laurentiis’s Thai Curry and figured I’d give it a shot.

I do want to say a few things right off the bat. I had trouble finding yellow curry paste at my grocery store. I bought curry sauce and just kind of eyed it. I couldn’t find a simple conversion chart for curry paste to curry sauce, so I basically poured in a little under 1/4 of a cup after giving it a taste. I think that’s the key to making sure you’ve got the right.

I will also note that shrimp can be a bit expensive. I dropped about $12 on deveined, deshelled ones, just to give you an idea of what you’re dealing with. It’s not a bank-breaker, but definitely something to take into account when planning out your meals.

I also completely dropped the chili, swapped out unfindable Thai lime leaves for actual lime juice and throwing the limes in (I realize I should have zested them) and skipped the step where you fry the noodles in canola oil which not only made this dish a bit healthier and cooled down the kitchen on a hot day but also took out a fairly involved step. Aside from those alterations, though, I followed the recipe as written.

Especially without the fried noodle portion, this is a super easy soup to put together. Open a few cans, pour a few things in a pot or Dutch oven and get those veggies in once it’s simmering. Let it sit for 30 minutes, then throw in the noodles and shrimp and let cook. That’s pretty simple.

And the results were pretty good, but I think some of my changes weren’t for the best. The dish lacked heat, which is a key element in Thai cooking. This wound up being good for my kid, because she’s not a fan of the hotness, but made the dish a bit bland. It also could have used more salt. Whenever I’m eating Asian food, I tend to skip the regular salt and go with soy sauce because it feels more in line with the flavors. Adding that to my bowl and then the larger dish when I put it away in the fridge definitely helped.

This is the first time I’ve ever cooked shrimp in what I consider my modern cooking timeframe. My mom taught me how to devein and shell them a long, long time ago, but I decided to cut that step out and just go with ones that had already been cleaned. Towards the end of the cooking process I realized I didn’t know what cooked shrimp was supposed to look like, so I brought one out to my wife, showed it to her and got the thumbs up. They turned out nice, plump and flavorful. I don’t generally cook shellfish, but this positive experience definitely gave me more confidence to do so in the future.