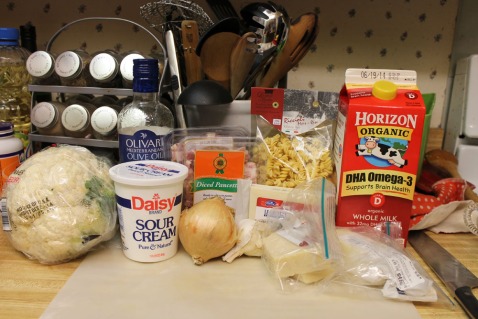 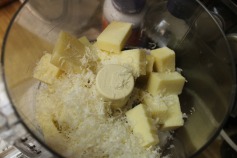 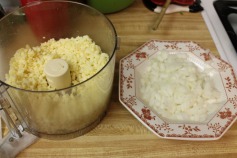 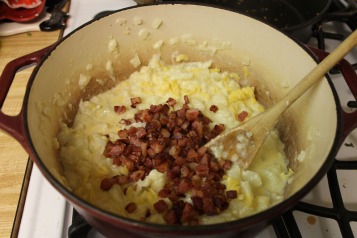 I’ve recently discovered a new food blog I love. It’s called Damn Delicious and the name says it all. While looking around for potential dinners last month (in other words, before the 80+ degree days started) I came across her recipe for Skinny Cauliflower Mac & Cheese. I’ve been hearing about replacing some of the noodles in pasta dishes with cauliflower and thought it would be worth checking out. This way, you cut out some of the carbs of the pasta, but also get the added nutritional value of the vegetable in there.

Recipe-wise, I followed this one for the most part both times I made yet. (See the next paragraph for the biggest departure I made.) The first time I might have been a bit light on the sour cream and the second time I might have put a little more than half cup. I will say that I recommend going lighter on this one because the sharpness of the sour cream can cut through a little too much if you go over. I also used my favorite method for getting cheese ready for mac & cheese: I cubed it and pulsed it in the food processor.

I made one big addition to this recipe that I think made the dish even tastier, but less “skinny.” I grabbed two packets of the pancetta available in my grocery store and cooked that up in a small pan, just to get it nice and crispy. Pretty simple, right? Definitely. But, after removing the pancetta and draining off just a bit of the fat, I cooked the breadcrumbs in there. So, you get that great, salty pancetta taste in the dish which I stirred in along with the cauliflower and other ingredientse but also these pancetta-infused bread crumbs on top that carry those flavors throughout. When I made this recipe the second time I used bacon and it was still good, but I think I’ll stick to pancetta when making this in the future.

I’m sure this is a great recipe the way it’s written, but I’ve got to say, the added pancetta flavor mixed so well with all that cheese and the nicely cooked, soft cauliflower to the point where this is now my favorite mac and cheese recipe (and I’ve tried a lot of them). This mix of dairy products is also super tasty together, that strong cheddar mixes well with the right amount of sour cream and the bit of parm in there to balance things out. I could see some Swiss or Gruyere working really well in there too. All in all, this balance of flavors proved so delightful, that I’ve made this my new base recipe for all things mac and cheese. As an added bonus, you could easily use this and add in other favorite takes on the genre. I’m pretty excited to try the Ruben mac with this base.

One last nice thing about this recipe is that, in addition to it being delicious, it can also either use up pasta in your pantry or leave around just enough for another round of mac and cheese. As I mentioned above, I made this twice in two weeks because I already had the panko, sour cream and a few other ingredients around from the first time, so all I had to do was pick up some cauliflower and go from there.