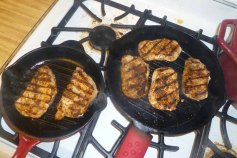 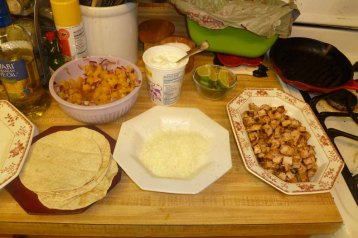 I don’t quite remember how I came across the recipe for Tacos A Pastor With Grilled Pineapple Salsa on My Recipes, but I did. I think I was looking for something to make out of pork tenderloin because it was on sale at the grocery store. Anyway, the only change I made to the directions involved cooking the pork on a cast iron skillet instead of a grill because, well, I don’t have a grill. I also cut out the cilantro and the chipotle chili because they run a bit too hot for my liking.

The prep for this is pretty simple. Create a rub, cover the pork chops and throw them on the grill pan. Meanwhile, there’s the salsa. I grilled the pineapple before the meat so I’d be able to work on that while the meat cooked. Again, this was a super simple process. I also cut up some limes and shredded some cheddar cheese. With all that done, it was time to eat!

I enjoyed the tanginess of the pineapple salsa which bounced well off of the spicy-ish pork. Everything played well together, making this a pretty solid choice if you’re looking to mix things up with the taco portion of your menu.