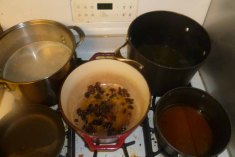 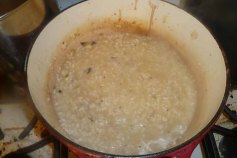 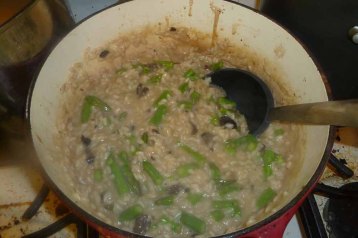 It bums me out that I can’t remember much about making Smitten Kitchen’s Asparagus, Artichoke & Shiitake Risotto. I remember liking the dish a lot, but the details have escaped into the ether. I did want to throw up this post though for a couple reasons. First and foremost, it was good enough to try again and I wanted to at least put that out into the world. Second, I have no idea how to prepare artichokes. I don’t have a link to the method I tried, though I think it was a YouTube video. I screwed them up pretty sufficiently and had to toss them. And third, after watching all these shows about food, risotto sounds like a super hard thing to make, but that’s not the case. It can take a while to swirl the chicken broth in the way you’re supposed to, but it ain’t no thang, really. I can see how it’d be tough to do in a short period of time, surrounded by other cooks and in front of cameras, though.