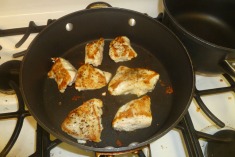 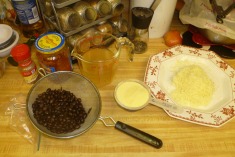 I’m a big fan of Mexican food and am always looking for a new way of cooking with those flavors, especially if it means I don’t have to muck around with wrapping food in tortillas over and over and over again. So, when I saw Food Network’s Chicken Tamale Pie recipe and saw that it looked pretty easy to put together, I was all over that one.

The beauty of this recipe is, in addition to being really good, I was able to make it after buying only one or two things at the store. I had some chicken breasts in the freezer and most of the other ingredients were hanging out in my fridge and pantry. I think I just needed the black beans and was good to go from there. It was also really simple to make, so thumbs up all around.

Since I didn’t have cooked chicken on hand, the first thing I did was coat the breasts in olive oil, salt and pepper and get them in a pan. While those cooked, I did the rest of the prep measuring out the corn meal and chicken broth, draining the beans and shredding the cheese.

After you get the chicken cooked and chopped up, you’re basically working with two pans, one cooking the beans, salsa and chicken, the other mixing the corn meal and other liquid ingredients. Once the latter is done, you mix in cheese and butter, then spread over the former before tossing the whole pan — I used cast iron — into a 400 degree oven for 30 minutes. I highly recommend serving with sour cream or maybe something a little fancier like Avocado Crema (might try that this week now that I think about it) just to add some moisture to the proceedings.