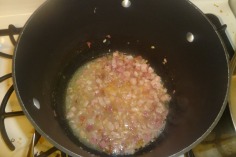 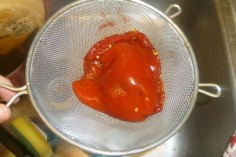 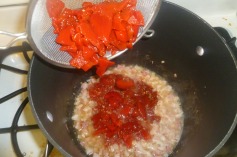 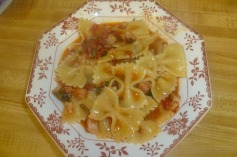 Thanks to my lack of posting, I’ve got quite a few folders packed with images of great looking food on my desktop just waiting to find their way to the internet. Hopefully I’ll get to all of them — or at least the ones that tasted great as well — but in the meantime, I wanted to make sure and write about the recipe for Pasta With Pancetta, Parsley & Peppers from Nigella Lawson’s Nigella Kitchen (page 194). This recipe is not only wildly easy to put together but also doesn’t require too too much work and has really tasty results. The only recipe note I’ll make is that I doubled the recipe to serve four instead of two.

As far as prep goes, this one’s super easy. You get your water-for-pasta on the burner and then start cooking the pancetta in oil. Once those are nice and cooked, you throw in the red pepper flakes (I probably cut the amount down because we’re not great fans of RPF), lemon zest, lemon juice, a few tablespoons of water. While that cooked I took Nigella’s suggestion and drained the jars of roasted red peppers with a strainer and then used my kitchen scissors to chop them up into little pieces (you could also throw them in a small food processor, Magic Bullet or what have you).

After the lemony mixture cooked with the pancetta, I tossed in the peppers as well as half the parsley. As the pasta was getting close to done I fished out a cup of pasta water (I always just use my Pyrex measuring cup with a pour spout on the end of it for this). When the pasta was finally done, you drain, toss with the pepper-lemon-pancetta sauce and add in the last of the parsley. Bingo bango, you’ve got dinner.

The recipe is very simple, but it’s actually got a lot of complexity to it as the saltiness of the pancetta mixes with the acidic lemon juice and the sweetness of the roasted peppers and the crunchy bitterness of the parsley. That’s a lot going on with each ingredient really pulling its weight. I think I’ve made this recipe two, maybe three times since getting the book back in December, so it’s become a pretty big, easy favorite that I think will actually be a pretty easy one to make when it really starts heating up this summer.