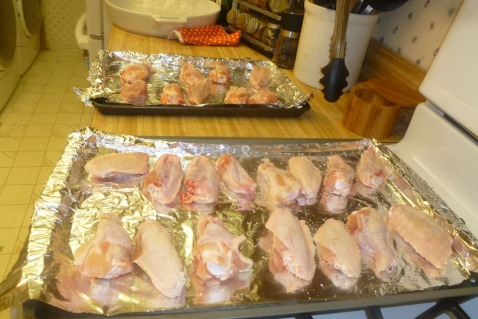 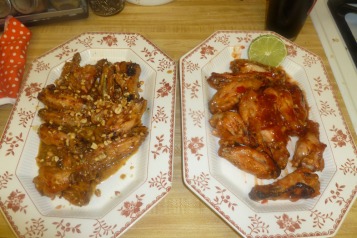 I’ve mentioned a few times here on MATK that I have a mysterious subscription to Good Housekeeping. The magazine just started appearing in our mailbox one month and keeps on coming. I’ve asked a few people if they hooked me up with it and everyone said no, so either someone’s playing a not-particularly-inspired prank on me or there was some kind of mix-up somewhere. Whenever it comes, I glance at the TOC which usually doesn’t have much in the way of interest for me, and then move on to the food section, tearing out any interesting looking recipes and putting them in my Big Blue Binder. One such page that I saw and immediately got excited about was a piece called Wings of Desire which showcases six different recipes for wing sauces: Sweet ‘N’ Sticky Thai, Bourbon BBQ, Hot Caribbean, Fiery Buffalo, Ballpark and Sesame Teriyaki.

A while back, I decided to give a few of these a try. Sweet ‘N’ Sticky Thai and Ballpark sounded particularly interesting, so I gave them a shot. As you can see by clicking through those links and looking, neither of these sauce recipes are particularly complicated. The Thai one just involves lime, sweet Thai chili sauce (which I’d never had before) and fish sauce (I skipped the french-fried onions because I thought I had some in the pantry, but didn’t) while the Ballpark sauce is just Dijon mustard, apple cider vinegar, honey (I skipped the cayenne) and some chopped up roasted peanuts as a topping.

For the wings themselves, I did not follow the method in the given recipe, but instead broiled them on high in two batches. Basically I got all the wings spread out on foil-covered baking sheets, then put one in the oven to broil for five minutes or so. When they started getting cooked, I took that tray out, put the other one in and flipped over the partially cooked ones. I just repeated that until they were cooked on all sides. Once the wings are cooked, you just toss them in the sauce, plate and serve. I was actually pretty surprised at how easy wings were to put together when I first made them years ago. It’s so easy and you can really customize your sauces to your liking.

One other little thing I want to add that’s kind of cool is that my wife and I actually have perfectly complimentary wing preferences. While we might differ on what kind of sauce we like, we each like the opposite kind of wing. I’m a fan of the ones that look like tiny drumsticks while she’s more into the other kind. It winds up working out perfectly because wings almost always come in pairs. What I’m saying is that we’re made for each other.