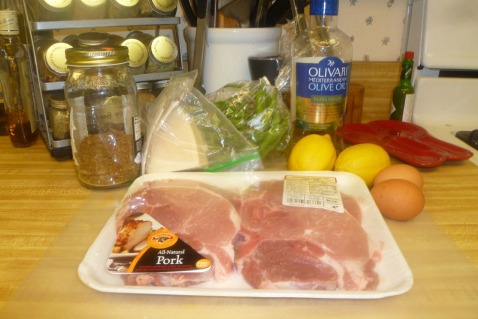 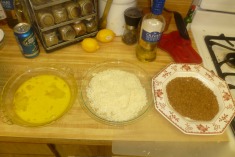 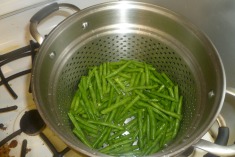 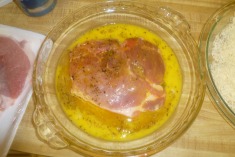 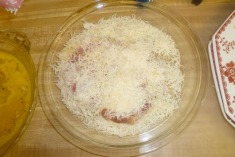 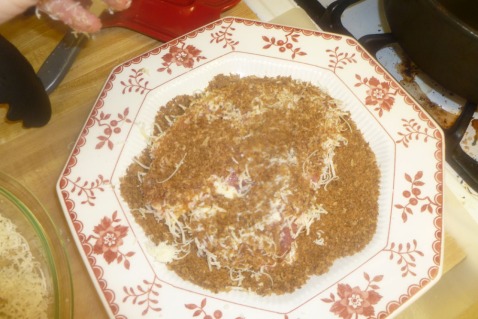 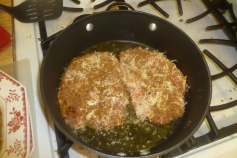 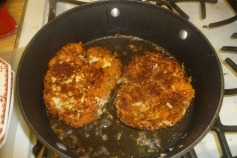 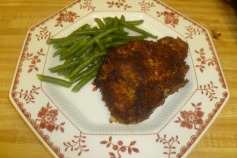 I’m not really sure why, but pork is second only to fish when it comes to proteins I have the least experience with. I try to keep my weekly menus well balanced, going with one beef dish, one vegetarian and not too much chicken, so I’m always looking for new ways to cook pig, which usually leads me to pork chop recipes. I can’t say exactly why, but that isn’t always the most thrilling prospect to me. However, when I came across Giada de Laurentiis’ recipe for Giada De Laurentiis’ Parmesan-Crusted Pork Chops, I was pretty excited. Not only have I had really great luck with Laurentiis’ recipes lately, but I think it’s also hard to go wrong with parmesan-encrusted anything. It also helps that this is a really easy recipe to put together, especially if you already have bread crumbs on hand like I did.

Instead of the cup of Italian breadcrumbs mentioned in the recipe, I actually used the last of the rye ones I had leftover from making Ruben Mac & Cheese a while back. From there, it was just a matter of whipping a few eggs, grating 3/4 of a cup or so of Parmesan cheese and getting the pork chops out of the fridge. As these things tend to go, you dip the chop in the eggs, then the cheese and finally the bread crumbs before putting them in a pan with hot olive oil. Cook, flip, let cool and eat. I also steamed some green beans to go along with this dish.

I’ve got to say, I was really impressed with how good and flavorful these chops were. The parmesan really worked well with the rye breadcrumbs and made for a really simple dish that I can mostly make from items in my pantry. For all those reasons, this recipe gets the double thumbs-up.