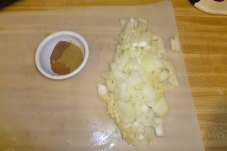 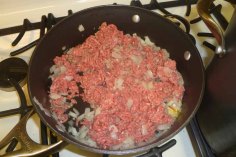 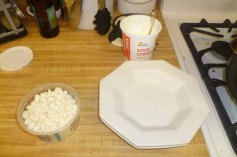 Last week I wrote about a few meals that I made a while back that had kind of fallen away from memory. I remember them not being bad, but didn’t really remember enough about them to accurately evaluate them here on Monkeying Around The Kitchen. This post is about a recipe from around that same time, but it was so good that it’s burrowed its way into my brain and wants to become a recurring player in my kitchen.

The meal in question is Sweet & Spicy Beef With Egg Noodles as seen in Michele Urvater’s Monday to Friday Pasta (page 132). It’s based on some Middle Eastern flavors and turned out to be uniquely tasty. I also appreciated that I didn’t have to buy too many ingredients to whip this up as most of them were already in my pantry or spice rack.

The recipe calls for cooking a clove of garlic, onion and chili in vegetable oil (I usually use olive oil with pasta, but I’ve found that it lends itself better to Italian and Greek dishes and stands out in a bad way sometimes when working with a different spice palette). I skipped the chili because we’re not super into spice here, but got the garlic and onion cooking like normal. I also mixed allspice, cinnamon and cumin for use later on.

After the onion and garlic cook for a bit, then you throw in the spices followed by the ground beef in. Once that starts to brown you insert tomato puree (which I didn’t have on hand, so I went with a combination of V8 juice and jarred tomato sauce) and let that simmer until the egg noodles are done cooking. After that, you just mix it all together and wind up with what reminded me of goulash a bit in look, but comes off with a much sweeter, tangier flavor.

The recipe also calls for garnishing with plain yogurt, sour cream, feta cheese or Asiago. I decided to go with both sour cream and Feta and I really enjoyed how the mildness of the sour cream became a kind of intermediary between the pasta and the bite of the feta. Just thinking about this one is making me hungry. Looks like I’ll be adding it to next week’s menu!