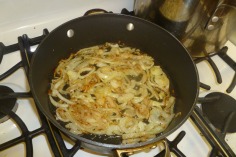 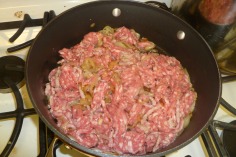 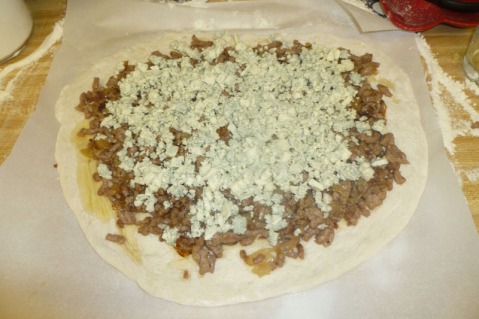 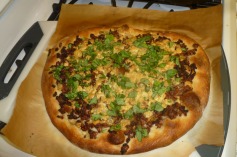 I had such bad results last time I made pizza that I not only didn’t bother posting about it, but also haven’t attempted to make any since then. That was a few months back. I was feeling adventurous a few weeks back, though, and decided to give Giada De Laurentiis’ recipe for Carmelized Onion, Sausage and Basil Pizza a try. I think one of the problems I had when I made pizza on my own is that I put too much stuff on the dough as it cooked. The somewhat wet ingredients got the dough moist and it didn’t cook all the way through, plus there were some structural integrity issues.

The beauty of this recipe is that it doesn’t have a lot of ingredients AND it’s easy to put together. You do need a little time, though, because you’ve got to carmelize the onions. After that, though, it’s just cooking the Italian sausage (I went with sweet instead of hot) with the onions and that part’s done. Since I bought dough instead of making it, I just had to roll that out into the desired shape, load up the pie with the meat/onion mixture and the blue cheese and pop into the oven on top of the pizza stone. That cooked for about 16 minutes and we had dinner after throwing basil on top.

In addition to the ease of cooking, I also really liked the taste of this pizza. I really like cooked sweet sausage and it mixed super well with the sharpness of the blue cheese. The basil hung around offering little fresh bursts of goodness that really rounded everything out. Next time I make pizza, I’m going to do the dough as well, either following Giada’s recipe or the one that’s in Michael Ruhlman’s book Ratio. Should be fun!