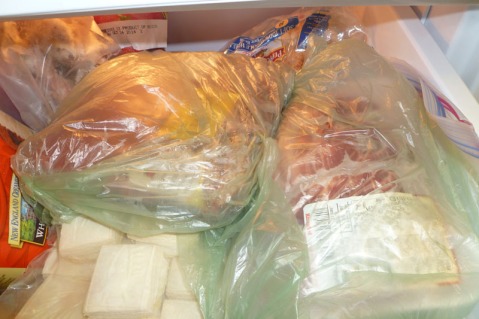 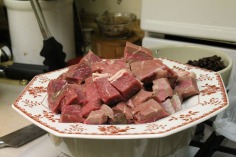 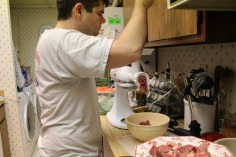 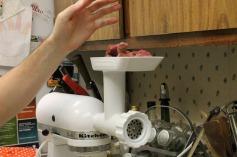 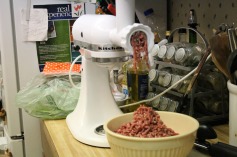 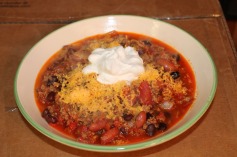 As I mentioned in my Christmas post, I got a meat grinder that attaches to the Kitchenaid mixer. I finally gave it a run through the other day in an attempt to make Pat Neely’s Famous Beef And Pork Chili again, which involves both ground beef and pork butt (I think the beef was tenderloin, I wound up grinding two different kinds of beef for two different recipes).

Anyway, the process I read about for grinding in Ruhlman’s Twenty suggested throwing them in the freezer for a while to get them cold and tight. Then you cut it into cubes and put it through the grinder and bingo-bango, you’ve got ground meat. One thing I noted, though, was that I should have trimmed some of the fat off the pork because it got pretty stringy in there towards the end. That made the cleaning process a bit difficult, but otherwise, it was super simple.

The recipe itself turned out okay. I know I praised this recipe before and I don’t think the fault lies in there, but instead in my lack of seasoning. I ran out of cumin and don’t think I properly replaced it. I also added some chicken stock for reasons I can’t quite remember forgetting that this recipe turned out a little bit watery the first time I made it. Ah well, it’s still super good and even though I didn’t get that strong bacon flavor as much this time around, it felt good knowing I ground everything myself.