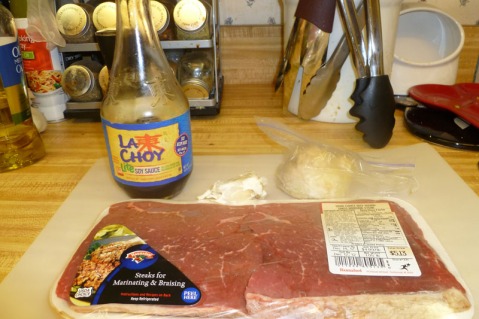 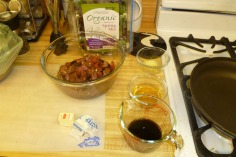 I really enjoy reading Anthony Bourdain’s Les Halles Cookbook because the recipes sounds really interesting and I’m a fan of Bourdain’s. However, there’s a lot in there that isn’t super practical when trying to figure out what to make in any given week. Still, I try looking around stumbled upon a recipe for Salade D’Onglet (page 123) that I didn’t quite nail, but think will make for a good dish to work on moving forward.

Ingredients wise, the list is pretty basic, mostly things I was able to find at my grocery store. I didn’t have dark veal or chicken stock around (need to make some more chicken stock), so I used the stuff I had from the store. The real problem, though was that I could not find onglet or hanger steak at my grocery store. I probably could have asked the butcher, but I’m kind of on a time crunch when I get our food, so I wound up settling for a beef round Swiss braising steak. I have no idea how close that was to what I was supposed to get.

I also didn’t quite get the timing down for this one. Things have been a little crazy around here lately so, I didn’t get the meat marinating over night, but I did get four or five good hours in which he said would work. Aside from that, though, this is a pretty simple and easy meal to put together, it just has a fair amount of working parts when you take into account the marinating, sauce and dressing making and putting everything together. Still, it’s pretty easy.

I think I might have cooked my sauce a little too long or added too much soy sauce in one of the steps because the finished product turned out a little salty. Not, spit everything out on the plate salty, but still maybe a little too salty. Like I said, I’ve got some work to do to really nail this the next time, but I’m willing to try again.