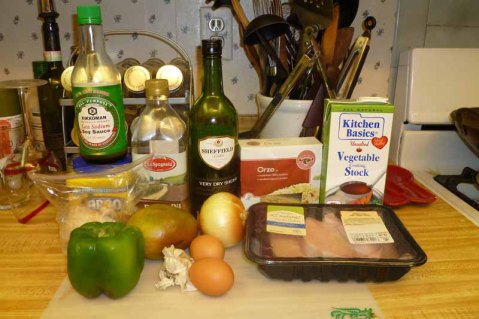 Onions & Peppers In The Wok 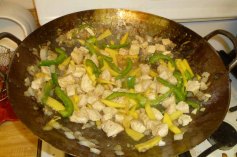 Mango Joins In On The Fun

I’ve made peace with the fact that there isn’t a whole lot of challenge in wok cooking (at least that I’ve come across in my limited experience) and have embraced the simplicity and general high quality of the finished meal. Because the recipes tend to be very similar, they also offer plenty of room to change things up when it comes to cooking. Take this recipe for Hong Kong-Style Mango Ginger Turkey from Stir-Frying To The Sky’s Edge (page 124). I actually didn’t have chicken thawed out, but did have some turkey breasts, so I cut those bad boys up and used them instead. I thought it wound up a pretty good combination. I also had a half box of orzo in the pantry from when I made Smitten Kitchen’s Baked Orzo with Eggplant & Mozzarella, so instead of rice, I cooked that up and threw it in at the end to finish cooking.

I’m not great and knowing when some fruits are ripe or not. When it came to the mango in this one, I decided to buy two just in case which turned out to be a good call. The first one I tried to cut up came out super smooshy, but the second offered up better slices. I still used the mush, but wouldn’t have gotten nearly as much yield had I only bought the squishier one.

I don’t make a lot of dinners that incorporate fruit like this, but I thought the subtle flavor of the mango worked well with the crunch of the green peppers and the velvet chicken, which you soak in a mixture and then throw in a boiling pot to cook for a few minutes. I wound up using that same pot to cook the orzo, so it worked out pretty well and I only dirtied a few dishes.