Beef Out, Veggies In

Beef Back In, Scallions Added 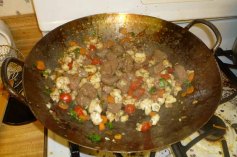 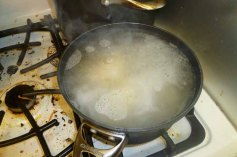 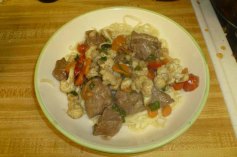 I got a little burned out on cooking with the wok a while back and it’s been sitting in a cabinet since then. I recently got it back out, re-seasoned it and got back to working with it. It might not be a super challenging cooking method, but I do like how quickly the meals come together with not a ton of work. So, I got my copy of Grace Young’s Stir-Frying To The Sky’s Edge and settled on Sit-Fried Cumin-Scented Beef with Vegetables (page 72), though I did have to alter a few things. First off, I went with some stew beef instead of flank steak because of the $6-8 price difference. I also didn’t fry the beef like the recipe says because our candy/frier thermometer broke and I hadn’t replaced it just yet. I also left out the red pepper flakes because I still haven’t figured out how to not burn my face off with them at random bites (something the baby isn’t a fan of).

The prep for this one was pretty simple. The beef was already chopped, so that went right into a bowl with the cornstarch, soy sauce and cooking sherry. I then cut the cherry tomatoes, cauliflower, carrots and green onions for later use. Instead of frying the beef, I cooked it like I’ve done several other times with the wok, by spreading it out into one layer on the wok and letting sit for a minute or so before stir-frying.

Once the beef was cooked, I removed it and got cooking first the garlic, then the vegetables in some peanut oil. The cumin went on followed soon after by the beef and green onions. I decided to serve this one on egg noodles instead of rice, so I had the water going the whole time and had them both done around the same time.

The recipe was pretty tasty and actually reminded me of the Cauliflower with Tomatoes side I’ve made and really enjoyed several times. You add beef to that along with soy sauce and the other trappings of wok cooking and you’ve got a nice little meal for yourself. Some day I’ll return to this recipe and actually fry the beef and see how that goes.