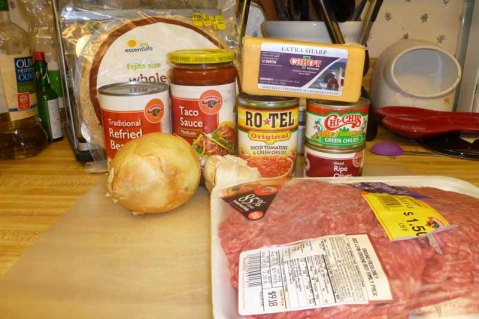 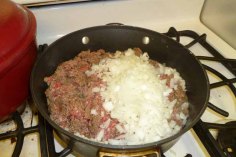 All The Kids In The Pool

Base Of The Pie

I’ve become a pretty big fan of AllRecipes.com, especially their app for the iPhone which has a spinner option that allows you to put in what kind of meal/dish you’re working on, the main ingredient and how long you want to cook it. I’ve come up with some really interesting recipes thanks to that like this one for Burrito Pie. It’s a really simple recipe that had pretty tasty results and most of the ingredients are canned which means the utensil you’ll be using the most is your can opener.

The recipe says to start the oven at 350 first, but I waited until I was further along with cooking the beef, onions and all the other canned stuff before getting to that step. No sense in wasting gas, right? So, I got to work on the beef and onions, then mixed in all the canned goods. While doing this I actually got my finger pretty bad on one of the lids, so watch out for that. That’s never happened to me, but I’ve also never had a toddler pushing me around while trying to cook, so it might not be as much of a problem for everyone else.

Anyway, as you can see in the pics, I used my high-sided pan, but I would probably ditch that in favor of my Dutch oven next time because it was hard to mix everything together without it spilling all over the place. While that was simmering for the allotted 20 minutes, I got the oven heating, shredded the cheddar cheese and got everything else ready for assembling. This is pretty much the same thing as putting a lasagna together where you’re layering the ingredients over and over. The recipe suggests using a high baking dish, but I decided to split it in half and use pie plates which I thought worked out well. Those went into the oven and boom, you’ve got a filling dinner that doesn’t take as much work as, say, enchiladas, which I like to eat out, but don’t like making.

I would imagine you could freeze a whole pie if you made this recipe the same way I did, though I’m not sure how long it would keep. We had a few tricky days after I made this, so we wound up eating both and it tasted great fresh and re-heated. All those classic Mexican ingredients mingled well together and didn’t get too spicy, so this will definitely be a keeper, especially for days when things are getting a little crazy and you don’t have time to do a ton of prep work.