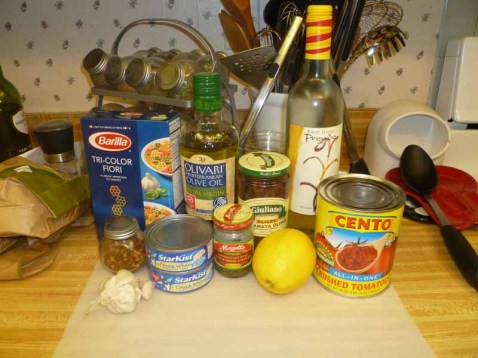 Olives & Capers In The Mix 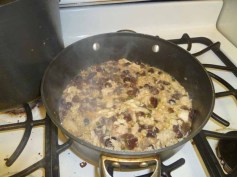 Puttanesca is a sauce that I am really growing to like. Between having it on vacation last year and then making my own last month, I’ve come to really enjoy that salty, briny flavor you get by combining tomatoes, capers and olives. So, when I was looking around Food Network’s website for easy to make, cool-ish dinners and came across Rachel Ray’s recipe for Tuna Puttanesca, I figured I’d give it a shot.

On the heat side of things, it’s not exactly the coolest because you’re making pasta and making a pretty simple sauce, but if you get them going at the same time you’re only dealing with a 15 minutes of heat and then you’re good to go. So, I wouldn’t save this for the hottest day of the year, but it definitely does the trick when things are starting to heat up outside.

It’s also very simple to make because you’re dealing with mostly canned or jarred ingredients. I took it easy on myself and got both black and kalamata olives pre-sliced to save myself some time. On that same note, I went with crushed jarred tomatoes instead of whole. When it’s hot out, you don’t want to be messing around trying to hold down slippery tomatoes or olives to cut.

So, some olive oil goes into the pan with garlic and then the tuna. You throw in the capers and olives, then some wine to cook down before adding the tomatoes and you’re pretty much there. Drain the pasta and put that in the pan to finish (I wished I had used the Dutch oven at this point because, as you can see, my pan got awfully full) and you’ve got yourself a nice easy dinner. I should say that the flavors in this dish got nowhere near close to the more intense ones I mentioned above. Instead of smelling a flower in all its glory, you’re smelling it while you’ve got a cold. All the elements are there, just not as full-forced. Still, quick, easy and pretty good are what I’m looking for with meals like this.