Chicken Breasts Ready For The Oven 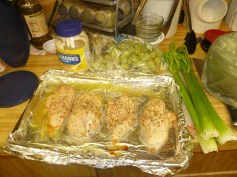 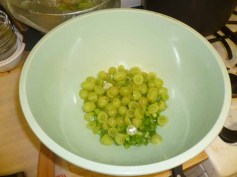 Making Mayo With An Electric Whisk 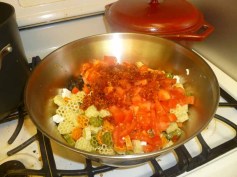 Like I said before, it was over 90 degrees last week and I was desperately looking for dinners that would not blast heat throughout the house. I came across a pair of Ina Garten recipes for Chicken Salad Veronique and Tomato Feta Pasta Salad that looked cool and both featured elements I could make earlier in the day and use during dinner. It was supposed to be an easy, relaxed dinner spread out over the whole day, but I wound up needing to make mayonnaise, so things got a little hotter than expected.

It started out well, though. I tossed four chicken breasts covered in olive oil, salt and pepper in to the oven and let cook for 40 minutes like the recipe suggests. When that was done, I let the chicken cool and then put it in the refrigerator until I needed it later. When it got closer to dinner time, I got to work on the rest of the salad which only really needed some cut up grapes and celery tossed in a bowl with the chopped chicken and mixed with mayo and tarragon from the herb garden.

Then I realized I didn’t have any mayo, but did have all the things I needed to make it again and decided to do that. I started out trying to make a half batch because we don’t really eat that much mayonnaise in our house, but I think I screwed up the ratios and had to then make closer to a full batch. This was a bit of a mess and I had to do it twice and busted out the electric whisk, something I’ve never used before, but it got the job done. In went the homemade mayo, out came chicken salad.

While I was sweating bullets mixing this at first by hand, a pot of water was boiling on the stove for the Tomato Feta Pasta Salad. This helped add an extra side to the menu, but also use up some of the pasta we got for Lu’s birthday party after my wife and the inlaws went shopping at BJ’s. Anyway, aside from the boiling pasta water, this was easy peasy to put together. Make pasta, throw a bunch of stuff for the dressing in a food processor, cut up some veggies and you’re done. I accidentally put some of the cheese into the processor, so the dressing came out kind of chunky instead of smooth, so I had to really mix it more, but it turned out really tasty.

I enjoyed both of these dishes and will definitely make them again. The chicken salad reminded me of the kind my mom used to make, especially with the grapes and celery, so it not only tasted good but also had a nice memory to it. Definitely give these recipes a shot if you don’t want to heat your house up too much this summer or want to take an easy dish to a cook out with friends.