A Few Thoughts On Giant Burritos 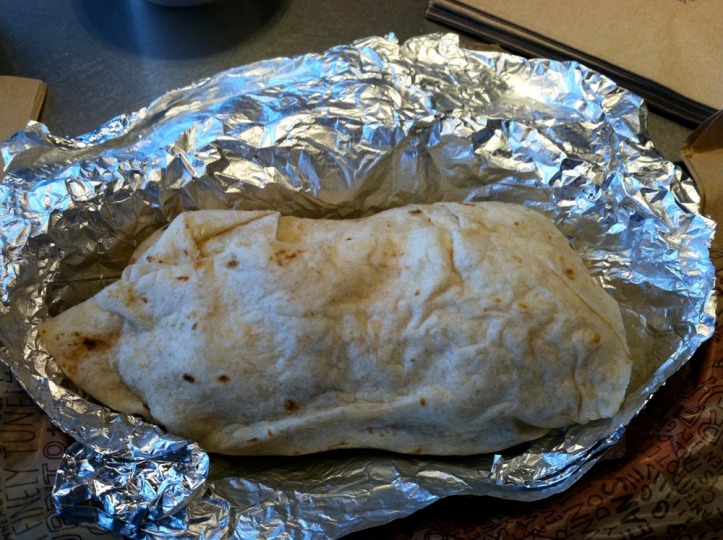 I first discovered the world of giant burritos in college. Actually, I really first discovered Mexican food in general in college, but that’s a story for another day. Up to that point, I’d really only had Taco Bell. Then I discovered a place about 30 minutes away from school (which was kind of in the middle of nowhere, though there was a Taco Bell fairly close) called Chipotle. The idea with this place was that you could choose various kinds of meat, rice, beans, salsa and a few other things to throw on the tortilla, fold it up origami style and shove into your face. Thus my fascination with giant burritos was born.

We ate at Chipotle whenever we could in college, but then I moved back to Toledo where we didn’t have giant burritos (a Chipotle moved in right around the time I moved out). As you’d expect, it was a sad time. Then, a few months later, I got a job at Wizard, moved out to New York and wound up eating lunch about once a week in the big Palisades mall nearby. What did they have there? A Qdoba!

Qdoba is very similar to Chipotle, but they also throw in other options like Queso (covering it in melted cheese) or mole and a variety of other flavors and sauces. For the longest time I actually had trouble keeping them separate in my head — it didn’t help that I had easy access to both when I worked down in New York City. But, after heading down to eat lunch at a new Chipotle with my wife and some of her friends I realized something, I like Qdoba better. There’s absolutely nothing wrong with Chipotle and I quite enjoyed my giant burrito (steak with pinto beans, regular salsa, sour cream and cheese), but I just prefer variety and Qdoba has more of it. Now all I need is for a Qdoba to open up near us as we are in the land of no giant burritos currently. Sigh.