Basil Vinaigrette Ingredients In The Blender 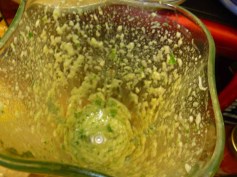 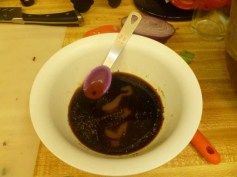 London Broil In A Baking Dish

This is one of those meals that sounds way fancier and more difficult than it really is. I found them while flipping through Rachel Ray’s 2, 4, 6, 8 cookbook and was easily drawn in by the Sliced Steak (page 160) and blue cheese tomato salad (page 161) because they both looked pretty easy to put together.

I started off with the salad because the steak was only supposed to take a few minutes to cook and prep. This was a pretty simple task. I made the vinaigrette first by combining shallots basil, parsley, mustard, white wine vinegar, salt and pepper in a blender and giving that whirl while adding olive oil. After that it was just a matter of cutting up the lettuce, cherry and yellow grape tomatoes and some onion, putting it in a bowl with the blue cheese and mixing in the dressing. Boom, done.

The steak also seemed easier on paper because you simply combined Worcestershire sauce, hot sauce (I went with green Tobasco because it’s my personal favorite), vinegar, olive oil, salt and pepper, put that on a piece of London Broil and toss that under the broiler for six minutes.

Here’s what I did, though. First off, I put it in a baking dish instead of a broiler pan which I think conducts heat differently. I also only just realized that the recipe calls for six minutes PER SIDE. I pulled the hunk of meat out after 6 minutes and it was still pretty pink inside so I tossed it on a big jelly roll-type pan and it went back in for another however many minutes (I lost count). Not wanting it to burn, I pulled the meat out and put it under some tin foil for a while, but it still came out pretty rare, but not raw, so I still ate it.

I’m not sure if I’d try the steak recipe again. It was alright, but I’m sure there’s better out there. If I do, though, I’ll definitely go with a smaller cut because that wound up being a lot of extra meat. I could have cut it up for tacos or something, but this was right before our daughter’s first birthday party and Memorial Day weekend, so it wound up sitting in the fridge for longer than my wife and I were comfortable with. I will definitely make this salad again, though. My wife turned me on to blue cheese when we were in college and I’ve been in love ever since. I actually didn’t have quite as many basil leaves as the recipe called for, so next time I hope my herb garden is back in action and I can really bang this one out of the park.