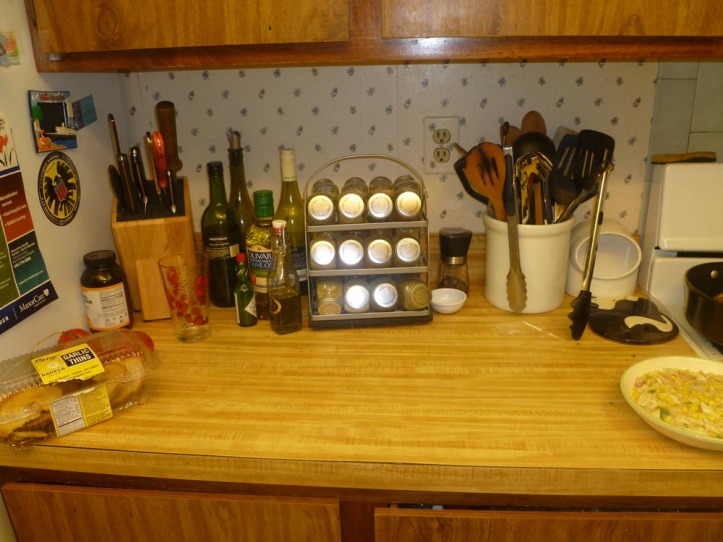 We’ve been having a few issues with our condo which make me want to move more than ever. But given the state of the economy and the amount of foreclosed and therefore very cheap units in our complex that are currently for sale, that will not be happening any time soon unless some company decides to give me big bucks to write about food, being a dad or pop culture. Wanting to make some kind of a change, I decided to do what I could without knocking anything down or ripping anything out and decided to rearrange my work space in the kitchen.

It was nothing major — you can see what it used to look like in this post I did last year — but I think it’s a lot more useful now. The main thing I wanted to do was put things away that I don’t use very often and try to get the things I do use within hand’s reach. I think I succeeded pretty well. I put away a few extra bowls that had been sitting out for as long as I can remember and put the toaster and tiny kitchen scale in the cupboard directly below this space. I also ate those bagel chips on the far left, you know, to help clean up.

Moving those few things out of the way gave me space to put the one thing I really wanted on the counter in a central spot and that’s my spice rack. It used to live in the pantry, which isn’t super inconvenient, but when you’re cooking and the meal just needs a little something extra, it’s nice to just reach over and grab it instead of going all the way to the pantry. Also, since our darling daughter seems to be getting more mobile and curious every day, leaving the pantry door casually open is no longer an option.

I’ve got other plans and ideas both big and small. I think I’m going to clear out some space directly behind where this photo was taken (where the computer is if you look at the pictures using the above link) and put out some of the loose spices and other things I used on a regular basis like vinegar and what not. I use those way more than the blender that’s sitting there anyway. I’d also like to box up some of the extraneous dishes we never use like the one dozen tiny coffee cups that have been used maybe twice since we moved in (they’re nowhere near big enough for my He-Man sized caffeine addiction). I’m not sure what I’ll put in there, but it would be nice to have some more space. The big project I want to eventually tackle, though, is putting down a new floor in there. We bought these black and white tiles like three years ago at a discount sale and while I didn’t care about the kitchen back then, I would love a new floor. The one we’re dealing with now is strangely porous and therefore ridiculously difficult to keep clean as even the mop or sponge water seems to settle in there.  I hate it and want to destroy it, but will probably just cover it up with a nicer, newer version. That’s just a matter of setting aside time and deciding to get it done. I’ll keep you posted on the changes as I’m sure you’re glued to your screens at the mention of my spice rack getting some counter space.