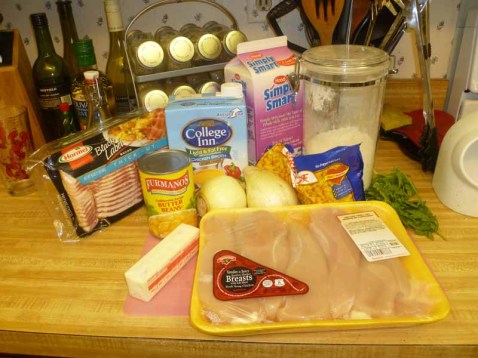 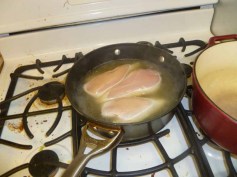 Being from Toledo, Ohio from parents who were both from Ohio, I had pretty limited exposure to southern food. We didn’t have a lot of barbecue places around from what I remember, though there are a number of ones in town now. And, as far as I knew, succotash was something only preceded by “sufferin'” in cartoon character exclamations. When I was flipping through the Chicken and Duck Soups chapter of The Ultimate Soup Bible, I stumbled upon a recipe for something called American Southern Succotash Soup With Chicken (page 296) that sounded pretty amazing. Anything with corn, bacon and chicken is aces in my book, so I decided to give it a whirl.

And it turned out pretty fantastic, plus the recipe isn’t all the difficult. You start off boiling some chicken breasts in chicken broth for bout 15 minutes. While those were going, I got to work on prep, chopping up a few strips of bacon, two onions and some parsley. When that was good to go, I started making the base of the soup which involved cooking the onions in butter for a handful of minutes. To that I added the bacon. My wife doesn’t really like squishy bacon in soups, so I tried to get it a little crispier. You then add in some flour to thicken, the hot stock from the chicken (which had been removed after it was done cooking and set aside for chopping) and some corn.

My grocery store didn’t have fresh corn, which was weird because they did a few weeks ago, so I went with frozen. You also add some milk and let that cook for about 15 minutes. Then you add in the cut up chicken, the lima beans and the rest of the milk and you are ready to go. I’m sure it would have been even better with fresh corn, but I think it turned out really well. It was thick and creamy without using cream, which I appreciated, but did have bacon and beans and chicken which all mingled together in a very satisfying and filling meal. Bonus points for being equally good if not better when reheated. Definitely give this one a try when you’ve got a colder day on your hands this summer.