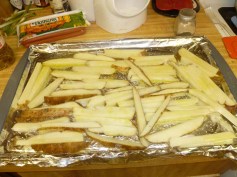 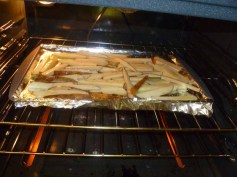 Fries In The Oven 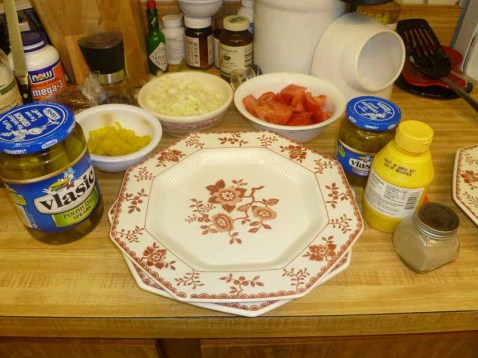 After watching so many food travel shows, I’ve become a bit fascinated with how different places prepare hot dogs. Back home, hot dogs were always a pretty simple affair: throw some Oscar Meyers’ on the grill, put in a bun and decide if you want ketchup, mustard or relish (I do not like relish, normally). While flipping around the All Recipes app, I came across one for Chicago-Style Hot Dogs and decided to pair them up with Oven French Fries also found on AR.com.

The fries actually took a lot more time to put together than I expected and suffered a bit for my poor time management. You’re supposed to soak the cut potatoes in cornstarch, water and soy sauce for an hour, but I only went about 45 minutes with them because I wanted to get eating. The results were pretty uneven, with some fries being very good and others a bit too crunchy. Next time, I’ll try to follow the recipe a lot closer. I almost didn’t write about them because they didn’t turn out well, but figured my goof might help you guys out. I’ll give them another shot probably sooner rather than later as it’s summer and fries go with everything.

The hot dogs themselves were mostly prep work. We have a stock pot that comes with several steamers. One goes much further down into the pan, that’s the one I used for steaming vegetables. There’s one that only goes four or five inches down from the top that I’d never used before, but it worked out perfectly for steaming the buns. See, put three or four inches of water in the pot and got that boiling. When it was ready I cooked the all-beef dogs for about five minutes and then put the smaller steamer tray in to do the dogs without turning the heat off. I also chopped up the onion, tomatoes and banana peppers. The recipe called for sport peppers, but I have no idea what those are and I already have the best banana peppers around from Toledo’s own Tony Packos, so I was good to go.

I made my first dog to the specifications of the recipe (I love that it’s written out for one dog at a time), except for the poppyseed buns which I could not find in either the bakery section or the bread aisle. I will say this, Chicagoans do not mess around with their hot dogs. These is a strong bit of food to eat. The pickles plus the relish with onion, mustard and celery salt join forces to kick your tastebuds in the face and it’s a pretty great thing, but I decided to cut a few of the ingredients out for my second dog. Overall, though, I hope this is but the first in a series of good hot dog experiences. Got any suggestions for what I should try next time?