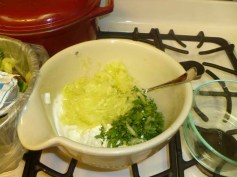 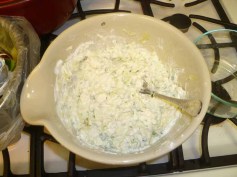 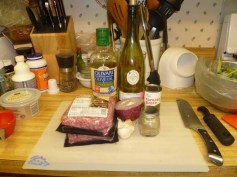 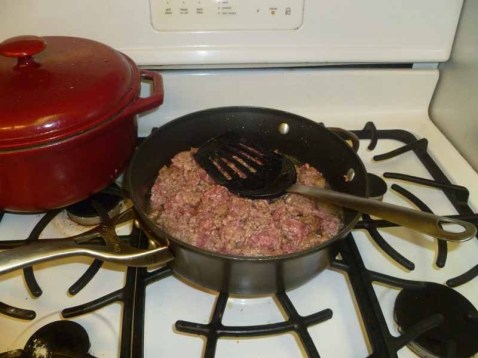 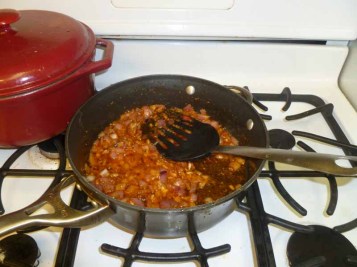 Lamb Added Back In

As anyone who read my early posts about Next Food Network Star, I was pulling for Jeff to win. I liked him as a person, he seemed to make good food and I didn’t want Penny to win. However, I’ve only seen a few episodes of his show and haven’t made any of his recipes just yet. Why’s that? Well, the show’s on at an odd time and I tend not to make sandwich type things for dinner. I worked in a sandwich shop for years and don’t find putting them together as relaxing as cooking more traditional meals. However, when I stumbled upon his recipe for Greek Tacos, I figured that was far enough away from my job and enough in my wheelhouse to give it a try.

As you can see from following the link, he breaks the meal down into three parts. You’ve got to cook the lamb and then also make the Feta Mint Tzatziki and the Cucumber Tomato Relish. In an effort to pace myself well, I decided to do them in reverse order of that, starting with the easiest part: making the relish. You’re basically just chopping up vegetables, putting them in a bowl and mixing with olive oil, red wine vinegar and pepper, so I got that done and put it in the fridge.

Next up, I tackled the tzatziki sauce which was a bit more labor intensive, but not by much. I’ve never grated cucumbers before, but that’s what the recipe said and that’s what I did. Once finished, those went into my pasta strainer and sat for the designated amount of time. While that dripped, I chopped the mint and garlic and put those in a bowl with the yogurt and feta. Once the cukes were a little more dry, then went in. Mixy mixy and you’re done.

Lastly, I went after the ground lamb. You cook it in a pan, then, once it’s brown, take it out and cook onions in the juices for five minutes before adding oregano and garlic. Follow that up with some tomato paste, let things caramelize and then put the meat back in the pan. Deglaze with red wine and you’re good to go.

I set the table up the same way I would for regular taco night which meant lots of bowls filled with lots of things. I also toasted the small non-pocket pitas on the fire and we had a really tasty meal. I think this might be a fun way to get kids who might be skeptical about trying new foods to try something new. It’s familiar (if taco night is a staple in your house like it has been in mine since I was a kid) but with some fun new elements. I’d never cooked ground lamb before but I thought it turned out well and my wife–who generally doesn’t like ground lamb–even like it, so there’s that.