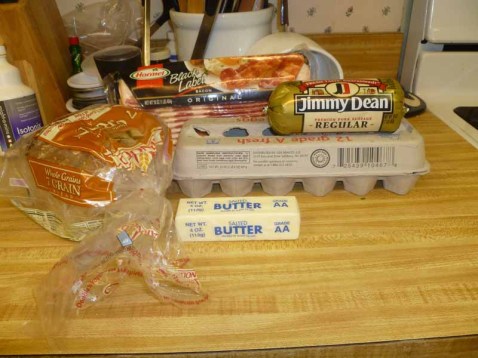 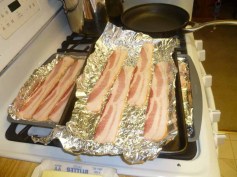 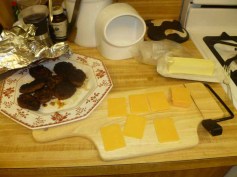 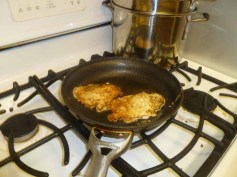 I am a big breakfast fan. I don’t mean cereal, which I occasionally eat these days, but a full-on spread with bacon, eggs, sausage, toast and the like. I was also looking to keep last week’s menu simple without producing a ton of food because we went to New Hampshire for Easter that weekend. Usually, we eat off leftovers for lunches and occasional weekend meals, but I didn’t want all that to go to waste.

So? Breakfast for dinner! I went fairly simple with the whole deal. I bought a pound of bacon, a package of Jimmy Dean sausage (patties are preferred) and some eggs. To save the house from getting super greasy from the bacon, I decided to give baking bacon another shot. Last time, I used a smaller jelly roll pan, but the bacon was frozen and it didn’t work out so well. This time, I followed a recipe I found on About.com which wisely suggested crumpling up tin foil and then opening it back up to give the bacon grease somewhere to go. I flattened it back out a little too much and still wound up with grease on the pan, but this was a much better way to go. I wound up cooking for about 17 or 18 minutes. I noticed that, since I was using two jellyroll pans right on very

While that was in the oven, I got to work on the sausage, which basically consisted of cutting them into patties and then cooking them in a pan, flipping constantly. There was no trick to this, I just followed the directions on the packaging. They wound up looking a little charred, but they tasted great.

I siphoned off some of the sausage grease and then cooked a pair of sunny-side-up eggs which turned out nice and brown, but tasted great. You’ll notice that I also cut up some cheese, that was for my wife who had a sausage and cheese sandwich. My only complaint about the meal as a whole is that it was very salty between the bacon and the sausage. I think next time I’ll try making my own sausage so I can have more control over those levels. When I ate the sausage for lunch the next day, I poured a little maple syrup on there and that was a solid choice!