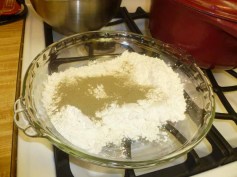 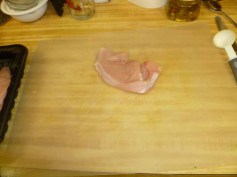 Dipping In The Egg Wash

Now Into The Bread Crumbs

I’m not the biggest fan of Rachel Ray’s recipes. I’ve made a few really good ones, to be honest, but I don’t generally gravitate towards them. But, we do have her 2, 4, 6, 8 Great Meals For Couples Or Crowds in our cookbook collection, so I figured I’d flip around and see if there was anything interesting in there. I passed a lot of recipes, but did wind up on Milanese-Style Turkey Cutlets With Peppers & Basil (page 148). And, you know what? It was totally worth it!

The preparation is very easy and something you’ve probably done if you cook a bit. It’s your basic flour/egg wash/breadcrumb set-up before pan-cooking the meat. In this case it’s turkey (I got cutlets at my grocery store) and there’s poultry seasoning mixed in with the flour as well nutmeg and Parmesan in with the bread crumbs. Oh, you’re also supposed to put the turkey under a piece of wax paper and flatten it with a pan. I dipped the first two and popped them in a pan with some olive oil and butter. Once they’re done cooking for a few minutes on either side you put them on a pan in a 250 degree oven and then repeat.

In another pan, I cooked up three peppers in olive oil as well as some salt and pepper to serve along with the cutlets when they were good and done. Man, you guys, this was a GOOOOD recipe. I’ve had a few problems with the flour/egg/breadcrumb, but this was super tasty. The turkey staid nice and juicy and the Parm flavor really popped with all the other ingredients. I will definitely make this recipe again. Even if I don’t find much else in this book, it’s worth it for one solid meal I can make on a regular basis. I also like that there’s plenty of ways to play with it (different peppers, cheeses, etc).