Onion In The Pot

Veggies Added To The Pot 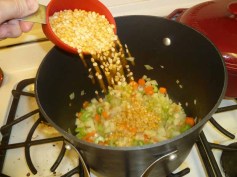 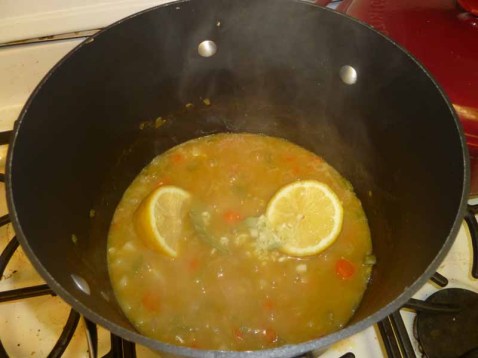 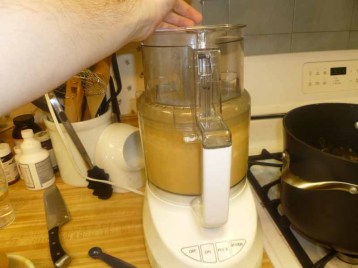 Into The Food Processor

This recipe is based on the Potage of Lentils recipe from The Ultimate Soup Bible (page 208), which I didn’t intend to put a spin on, but I mistakenly thought I had lentils in my pantry when instead I had yellow split peas. After I realized I goofed up a bit, I figured I’d give the whole thing a shot with the yellow split peas and you know what? It turned out pretty good.

Like a lot of soups, this one was mostly prep followed by putting things in the pot in the right order. I started off chopping up celery carrots, garlic and potato even though chopped onions were the first thing that actually went into the hot olive oil in the pot. After all that cooked for a few minutes, I added in the yellow split peas and vegetable broth and simmered for 30 minutes.

At that point, I tossed in two bay leaves, a halved lemon and more garlic. This cooked for ten minutes before removing the lemons and bay leaves, squeezing the juice from another lemon in and giving the whole thing a stir. I let it cool down a bit and then transferred all the soup into the food processor and gave it whirl (heh). Once that was all set, I returned it to the pot and added cumin, some green Tobasco, salt and pepper. Boom, done.

This turned out to be a great little soup that worked well with my unintended tampering. It kind of reminded me of a soupier hummus, but with more citrus zing. We had this back when we were getting a pretty brutal cold snap a few weeks back, but I think I’ll definitely give it another shot when the weather turns cold again. I don’t know about you guys, but I just can’t wrap my head around soup in the summer.