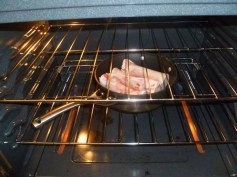 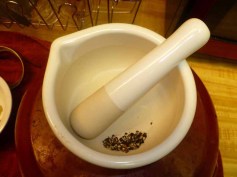 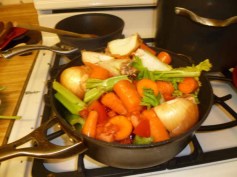 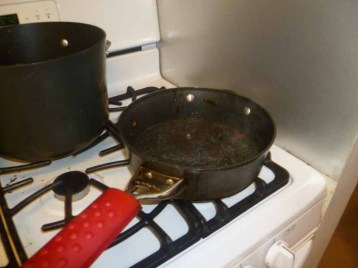 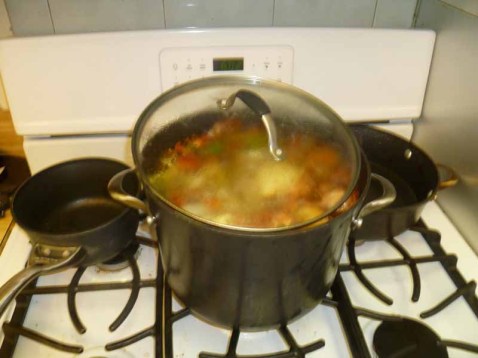 Stock Simmering With Lid On 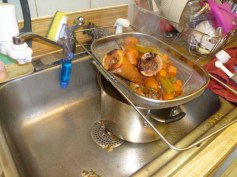 Draining Out The Solids 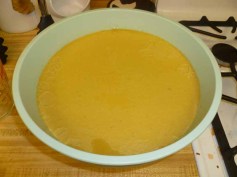 Measured Beef Stock To Be Frozen

Alright, folks, this post has been a long time coming. After making my own chicken stock, I decided to give beef stock a whirl as well and it went really well, except when I burned my hand. The key to making beef stock is finding a place to buy beef bones, which I hear can be difficult, but I happened to be at my local Hannaford one day and they had big ones for sale. With those in hand, I busted out The Ultimate Soup Bible (page 32) and got to work.

I’m not sure how much of a difference it made, but the cow bones I got were not chopped up and I half-heartedly tried with my knife and failed, so I just put three of those big boys in a high-sided pan in the over at 450 degrees and got to chopping. Like most stocks, the recipe called for carrots, celery and onion, but also tomatoes. I got those and the herbs (parsley and thyme) as well as crushed black peppercorns and a bay leaf ready while the bones roasted for a half hour.

After the half hour mark, I added in the vegetables and roasted for another 25 minutes or so. At that point, I dumped the contents of the pan in the stock pot and boiled some water like the recipe suggested. While the water boiled I started doing something else–can’t remember what exactly–and accidentally reached for the handle of the pan…that was in the 450 degree oven…without a glove or a cover on the handle and burned the heck out of my hand.

I immediately got my hand under cold running water and soon transferred to a bowl of ice water (more on injury treatment in another post along with a few other dumb injuries I’ve sustained in the past month or so). While I kept a nasty burn and possibly blisters at bay on my right hand, I kept going with the stock-making. I poured the boiling water from the pan into the pot followed by about 18-inches of water and set it to boil along with the herbs and spices.

I simmered for six hours (I read in a Bourdain book that the longer, the better), then strained and let the stock cool. This time, I knew about how much liquid I would have, so after it cooled, I placed the stock in a big plastic bowl and popped it in the refrigerator. I left it there over night and when I went back to strain the fat, I was happy to find that it had solidified into a disk that I could easily remove, which is a heckuva lot easier than skimming, I’ll tell you that.

Instead of freezing ice cubes of stock this time around, I used my mother-in-law’s idea and instead measured out one and two cup amounts, poured that into marked bags and froze those bags in larger freezer bags. As I mentioned in the post about making Alton Brown’s recipe for Swedish Meatballs, I’ve already used the stock and it’s pretty great. The only problem with this method is that you wind up wasting the tiny bags when you tear them apart to get the stock out. The perfect solution would be ice cube trays with one and/or two cup sized holes. Do they make those? That’d be awesome.