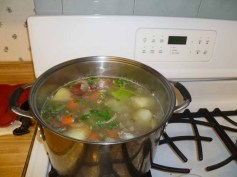 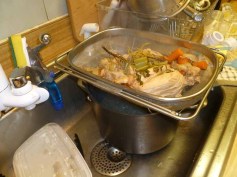 Straining Out The Solids 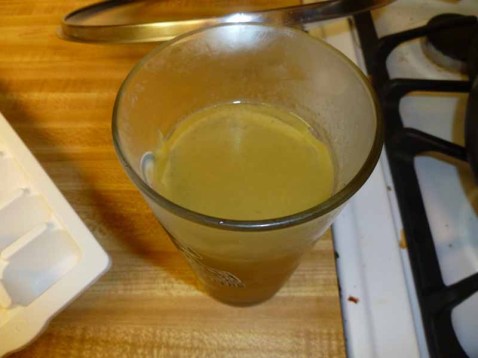 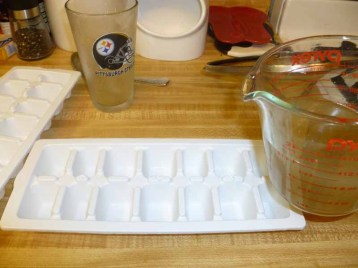 One of the common things I’ve read in most of the cookbooks and books about food is that making your own stock is important. Not only do you know exactly what goes into it, but you’re also creating something very basic that you can use in many, many things. I’d been wanting to try my hand at stocks for along time now, but only actually got around to it in the past month. Why the delay? I was a little worried about the time commitment, plus I wasn’t quite needing stock yet. Now that it’s getting cold and I’m making more soup, I figured it would be a good time.

I started with a chicken stock recipe that I got out of The Ultimate Soup Bible (page 30) because it was an actual recipe. Anthony Bourdain had a much less specific one in  The Les Halles Cook Book, but I wanted to do it by the book and have my hand held for a bit before eying everything.

The recipe called for bone-in chicken pieces that included wings, back and necks, but I couldn’t find that at the grocery store and the butcher wasn’t around, so I went with a pair of bone-in breasts. Not sure how much difference that made, but otherwise, I followed the recipe.

I tossed the chicken, two unpeeled onions and some oil in a stock pot and started cooking until everything was brown. While that cooked, I chopped up two carrots and two celery stalks, grabbed some parsley and thyme stems, a bay leaf and ground about a dozen black peppercorns. I put all that in a container and waited until they were needed.

Once everything was browned, I filled the pot with 16 cups of water and waited for a boil. Once I got there, I dumped the container of veggies and herbs and simmered for three hours. After that, I strained out all the solids and let the stock sit. I tried scraping out fat and did my best, but came up with a much better method that I’ll talk about when I write about making beef stock.

Anyway, I had read in many places that making stock ice cubes is the way to go, so after everything cooled, I got to work on that. It was a multi-part project because we only had two extra ice cube trays and not a lot of space in our freezer anyway. I now have two bags filled with chicken stock cubes ready to go. I took about 10 or 12 back home for Thanksgiving intending to use them instead of turkey stock to make the gravy, but wound up making my own turkey stock. It didn’t go to waste though, because my mom used them in the stuffing.

I’m really glad I did this, not just because I feel like I’ve done something that not a lot of people do, but also because I finally just did it. Sometimes things seem like big hurdles, but once you finally do them, they turn out to be pretty easy. Sure, you’ve got to be home to keep an eye on the stock as it simmers, but aside from that it’s really easy and worth doing. I hope to make some killer winter soups now!