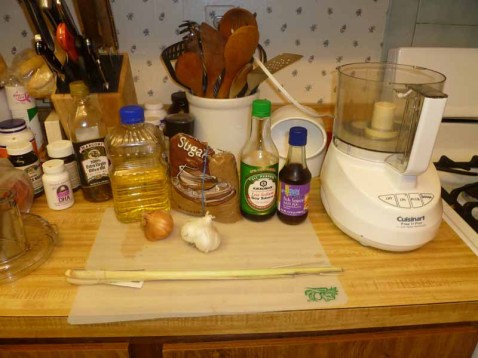 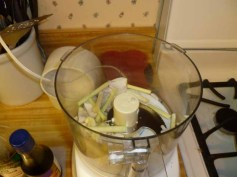 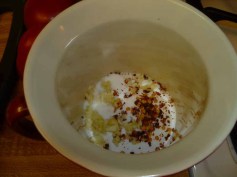 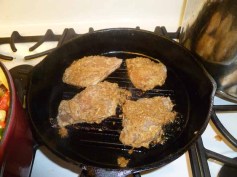 This post is an example of not judging a book by it’s cover. I got the recipe for Grilled Lemongrass Chicken with Nuoc Cham, a Vietnamese dish, out of a free magazine I got from the grocery store two years ago! I frequent Hannaford and have since we moved to this part of New York several years ago. From what I’ve seen, their prices are good, their produce seems fresh and everyone I’ve dealt with there has been nice. When you buy a certain amount of groceries they give you this magazine called Fresh. Normally, I wouldn’t have bothered looking, but a few months back I was organizing the magazines that were cluttering up the cookbook shelf and came across a series of them. I went through and ripped out recipes that looked good, but this entire issue from May/June 2009 looked so solid that I kept the whole thing. I’ve never cooked Vietnamese food before, but my wife actually made some excellent Summer Rolls a few years ago from this very issue. Plus, it was relatively easy to make, so all the better.

The first step is concocting a marinade which involves tossing 1/4 cup of minced lemongrass, one large shallot and three garlic cloves in a food processor and pulsing. You then add two tablespoons of brown sugar, two tablespoons of soy sauce, two tablespoons of canola oil, one tablespoon of fish sauce and a quarter teaspoon of black pepper and pulse some more. I poured this mixture over four chicken breasts that I cut in half and trimmed the fat from. The recipe calls for letting these rest for 4 to 6 hours in the refrigerator. I can’t remember how long I went for, but it was around there.

The next step is basically grilling the chicken, which is no problem. While I had the chicken in the cast iron grill pan, I put together the super easy and tasty Nuoc Cham sauce which is just a combination of a garlic clove, two tablespoons of sugar, 1/2 teaspoon of crushed red pepper flakes, 1/4 cup of hot water, lime juice and a tablespoon each of fish sauce and rice vinegar. Put all that in a jar or container and mix and you’ve got a light sweet/salty/sour sauce that I could dip just about anything in.

I had a great time cooking and eating this meal. I love when trying something new doesn’t blow up in your face. Like I said, I don’t really know much about Vietnamese cooking, but these flavors worked really well together. I’m kind of fascinated by lemongrass and am not even sure if I’m using it correctly, but the sweet and sour taste of the grilled chicken hints that I got it at least partially right.