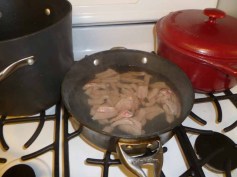 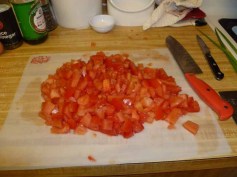 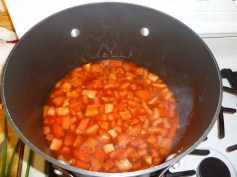 With the weather turning colder, I find it comforting to have at least one soup recipe on the menu per week. Last week I decided on Tomato & Beef Soup from The Ultimate Soup Bible (page 343) because it was simple and didn’t require a lot of extra ingredients. Plus, it included at least one cooking method I had never used before. After cutting up the beef in strips, I put them in a pan and added a cup or two of boiled water straight out of the hot pot. As the recipe called for, I let the water cook the meat for two minutes, then drained and set aside. Pretty cool.

From there, everything else was pretty simple. I put two boxes of beef stock (it wouldn’t be until later that I actually made my own, but that post is coming, I promise) in a pot and started warming. I went with more of just about everything than the recipe called for because I didn’t want to have a lot of leftover ingredients. As such, I also used a full tiny can of tomato paste and seven tomatoes. The rest I eyed, but usually went with more than written.

You add the chopped tomatoes and some sugar, boil, then simmer for two minutes. After that mix cornstarch and cold water, add that and stir. Then you beat an egg white (or two in my case) and pour that in while stirring (not easy to do while trying to photograph the steps). I’ve done this with a few other recipes, but I always like how quickly the eggs cook when added to the hot soup. Reminds me of a much more appetizing version of the Cement Mixer shot I was given on my 21st birthday (for the uninitiated, you take a shot of Khalua or Bailey’s, don’t swallow and then add a shot of lime juice, it curdles in your mouth, a trick played on young whippersnappers who will take any shot without a thought).

I made a few other alterations to the recipe, but nothing huge. It called for sesame oil to be poured over each bowl, but it turned out that we didn’t have any, so I added some low sodium soy sauce along with some rice vinegar. I know they’re not the same, but they added some interesting flavors. The recipe also called for scallions to be added on top, but I chopped a bunch up and just put them right in the soup. If it tastes good on top, it must taste good in, right?

The overall flavor of this dish was interesting and a little difficult to get used to. Don’t get me wrong, it wasn’t bad by any means, but my wife and I both agreed that an Asian soup with tomatoes was not something we were used to. Of course, neither of us are experts in that field, but I also think that my additions to the recipe might have made the overall flavor fit more firmly into that section of our mental flavor libraries. Like I said, I liked it and enjoyed having it for lunch the next few days, especially with that loaf of garlic bread I picked up at the grocery store.