Thanks to the snow storm and subsequent power outage the weekend before Halloween, the costume party we were going to go to on Saturday got cancelled. Thankfully, the hosts decided to reschedule for last Friday. We were glad to hear this news not only because we wanted to hang out with friends, but also because we had a really good idea for costumes to fit the “wildly inappropriate” theme but also my wife spent a long time on Lucy’s piggy costume.

I didn’t want to go with anything too gross or out there to fit the theme. We were talking about it and then one day it popped into my head: Lucy can be a pig, I can be a butcher and Em can be a chef. She got a pattern for the pig costume and we got to thinking about ours. We ordered a few aprons as well as a chef coat for Em. We also came across an apple teether at Baby’s R Us that we just could not pass up. As an added bonus and probably the impetus for my costume eureka moment, our hostess for the party absolutely loves pigs. She doesn’t eat bacon and has pigs of all kinds all over her house. 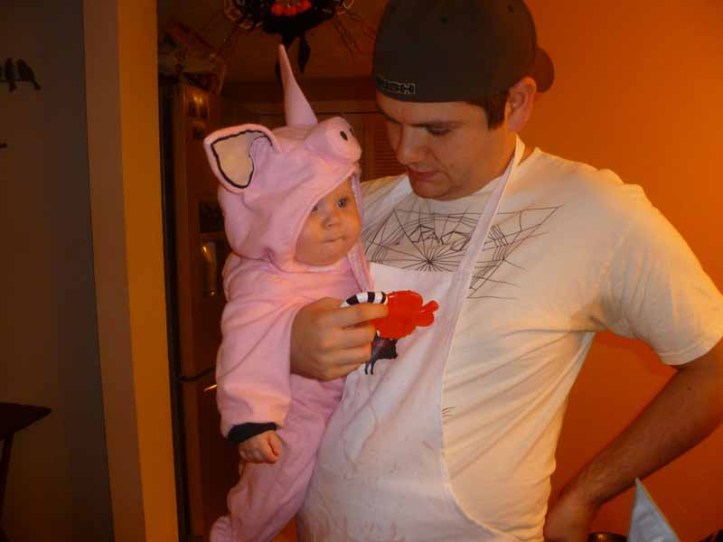 For knives, we each cut some shapes out of cardboard and used electrical and duct tape for color. I designed a couple logos on the computer and my wife put them on her coat and my apron. The apron also got a smattering of red and brown water color paint to give it that old blood look. The party itself was a lot of fun and, even though most people didn’t wind up dressing up, I think we would have had the best costumes anyway. Plus, just look how cute the kid looks!